I recently purchased this console table at a consignment store.  You might notice that it’s already been chalk painted, but this particular blue has a bit of a green undertone and overall, the color is too bold for my home. 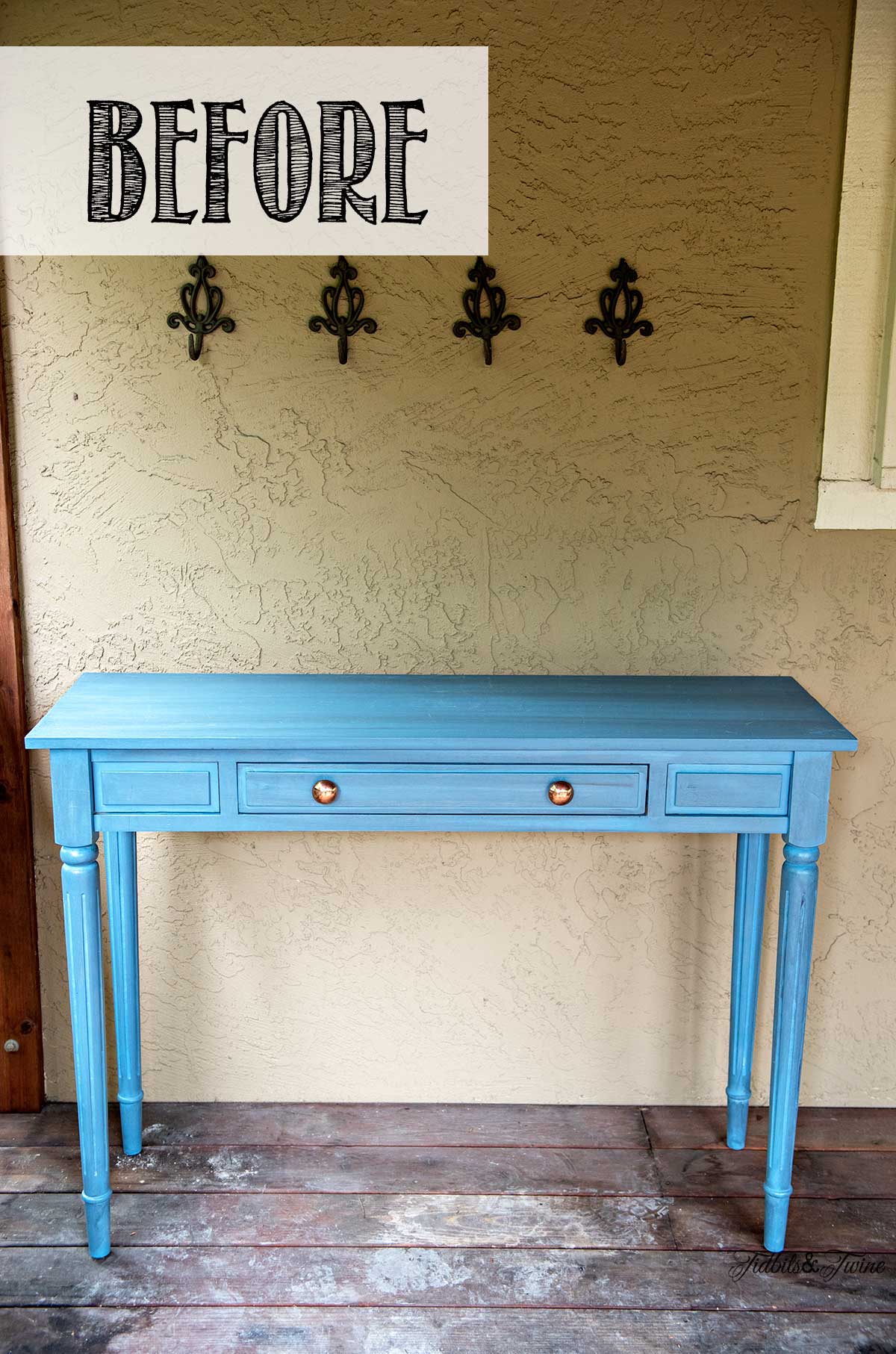 Actually, the first thing you might notice are those knobs.  What?!?!  I love a good juxtaposition of old and new, but this just doesn’t work for me.  The color is too orange and the size is a bit big as well. 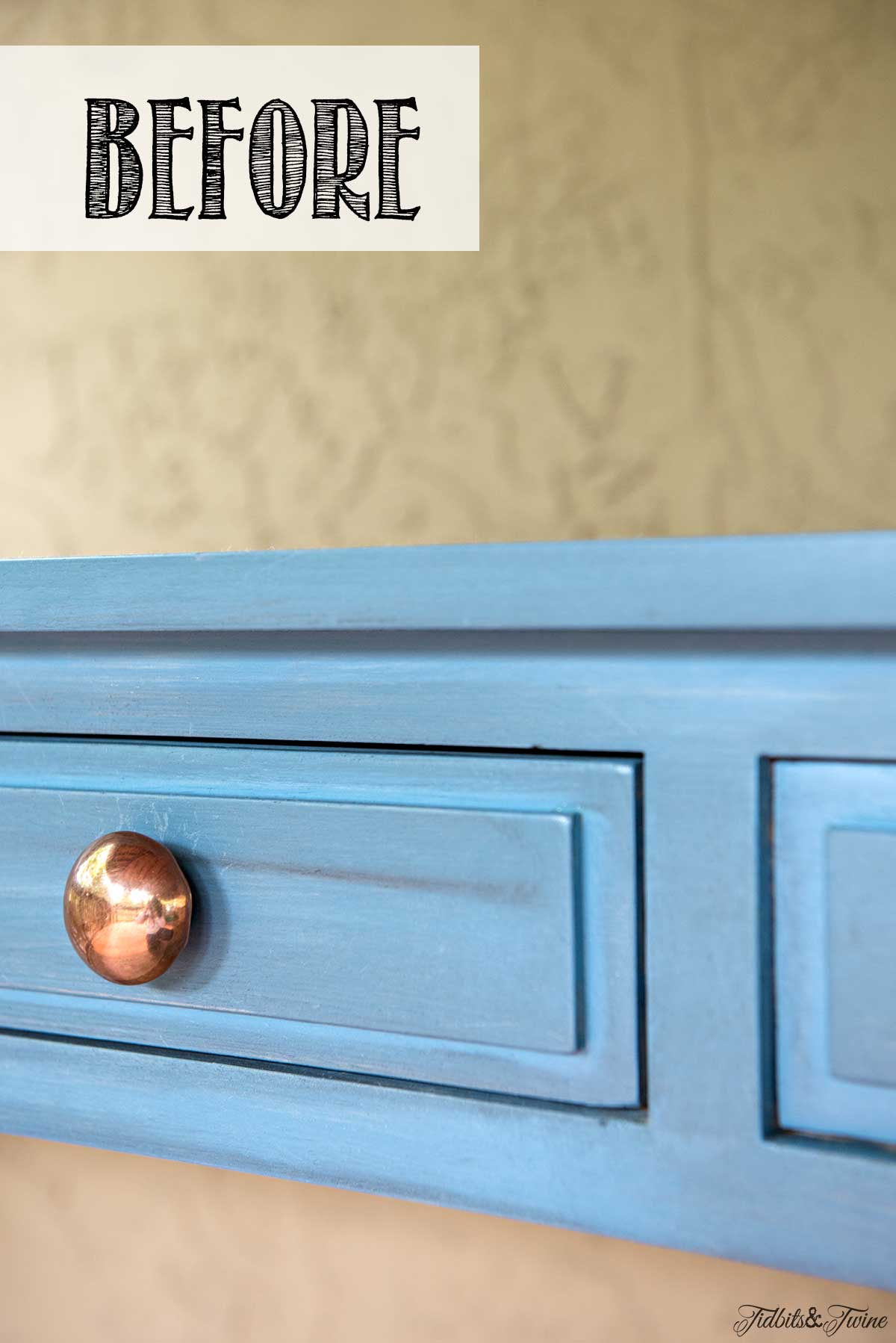 For a contemporary look, these are trendy right now and would work: 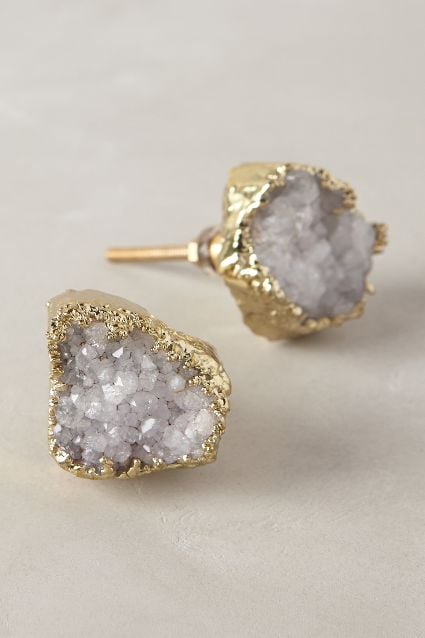 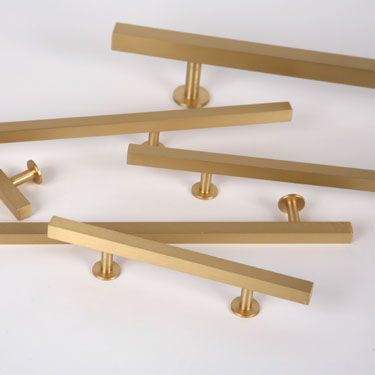 I’m not really a contemporary gal, though, so I decided to go with more traditional hardware and while I was at it, decided to add an onlay to the corners.  Actually, I couldn’t find an onlay that I liked and so used knob backing plates instead.  Here’s a look at the hardware I chose {before painted}. 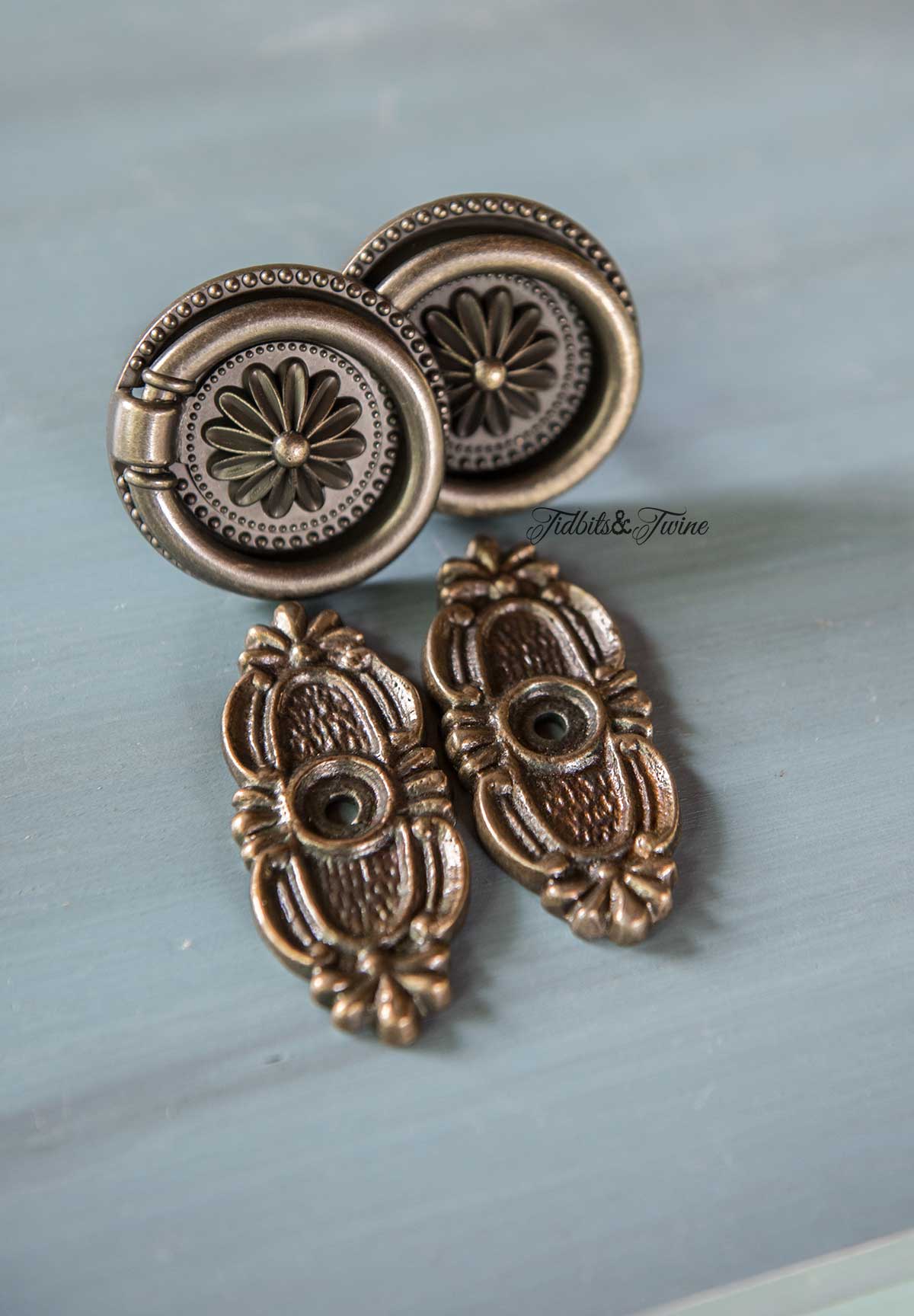 To begin, I used Gorilla Glue to adhere the backing plates to the corners of the table, just to give the table some additional detailing.  Once glued, I used paintable spackle to fill the center hole. 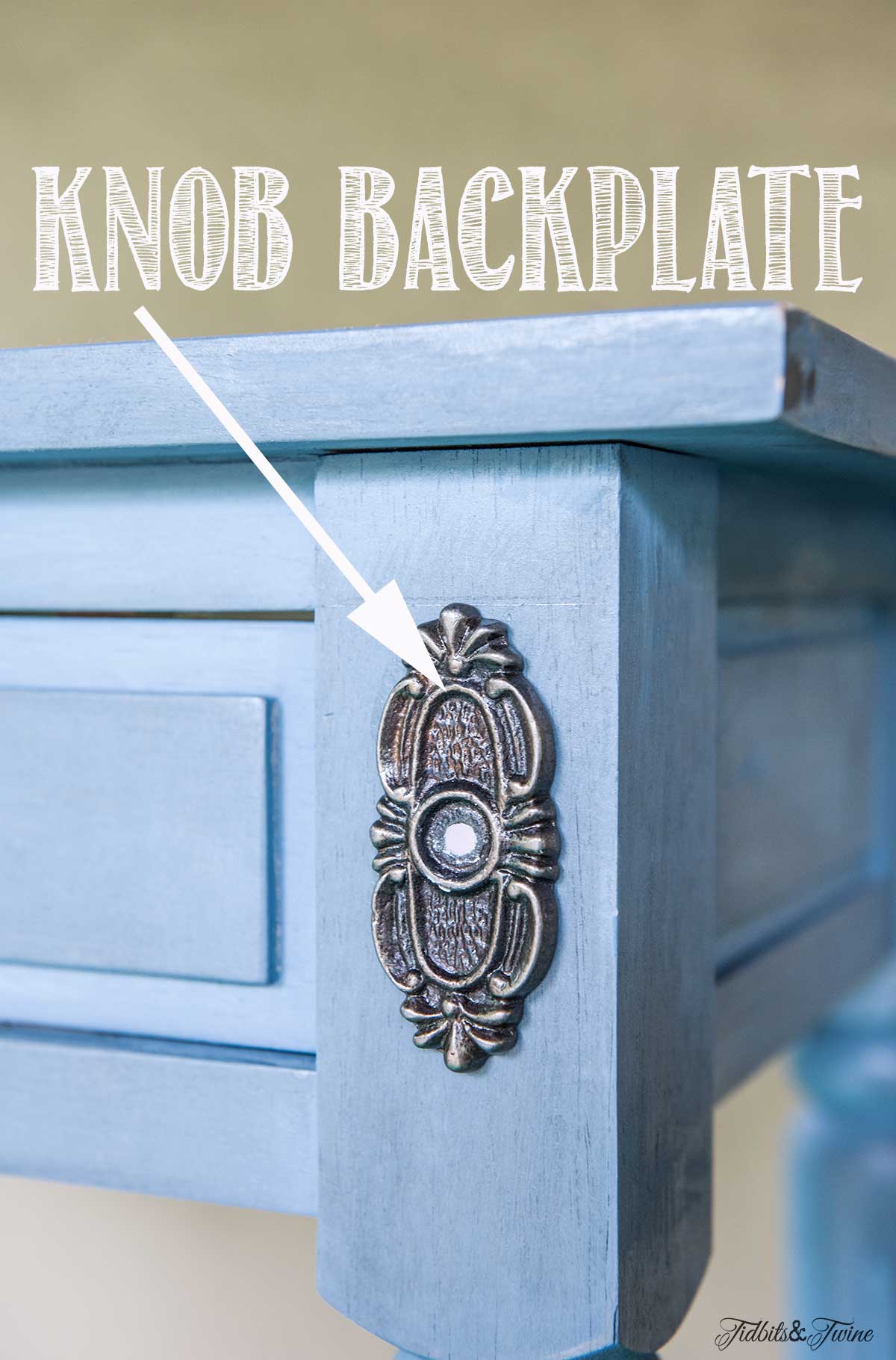 With that done, I painted the entire table with CeCe Caldwell’s Texas Tea, which is a dark brown.  I didn’t water the paint down as much as I usually do, so I did just one, thick coat.  Since the brown won’t really be very visible, I didn’t worry about making sure I covered all of the nooks and crannies. 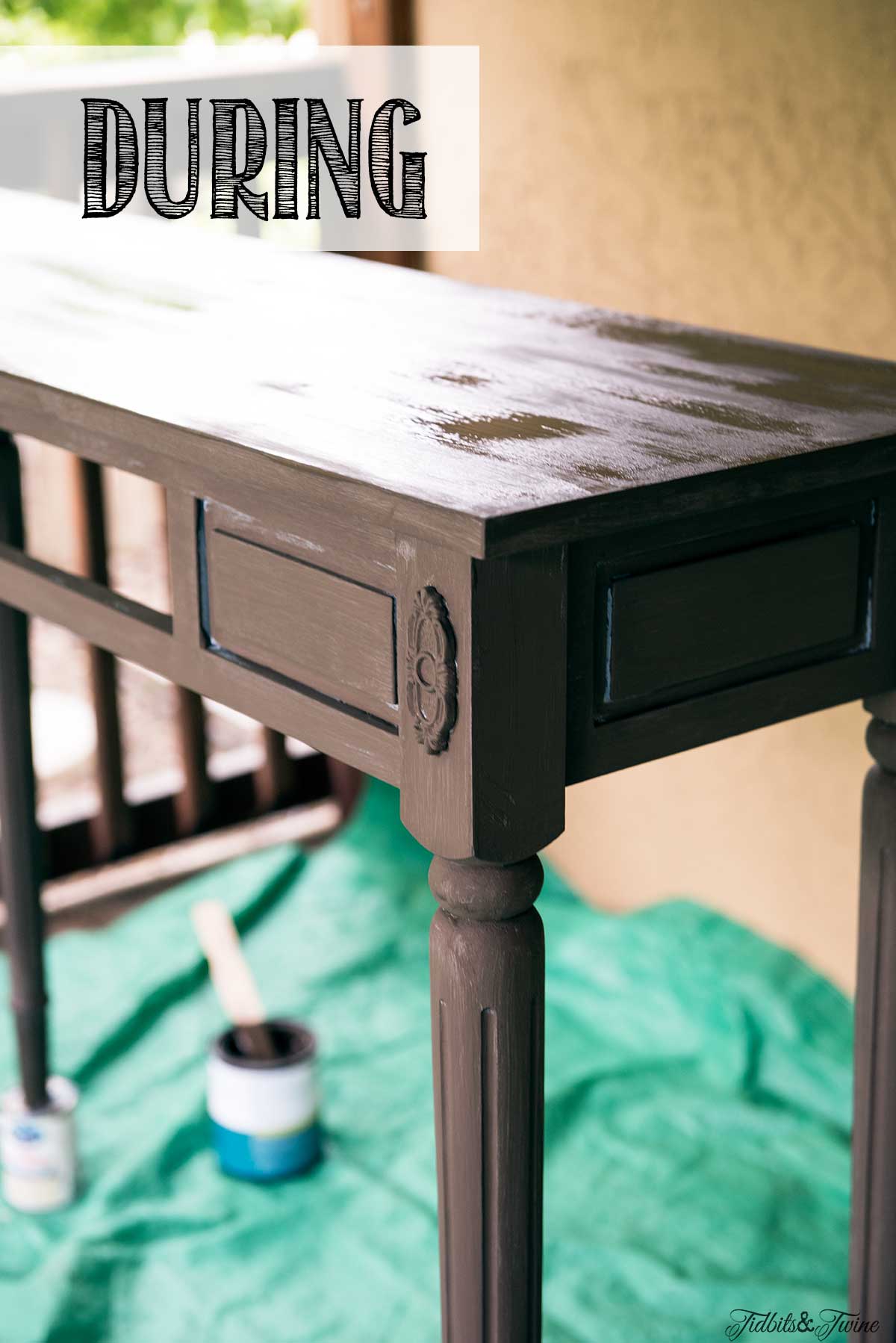 I then added two coats of Chesapeake Blue….well, mostly blue.  Truth be told, I randomly added gray and Vintage White to the blue to get a more toned-down looking blue.  After painting the table blue, I used a wet rag to rub some of the blue off to reveal the brown beneath.  Another benefit {at least for me} of distressing using this method is that it also wears down the blue unevenly across the piece, adding subtle color changes instead of leaving it solid blue. 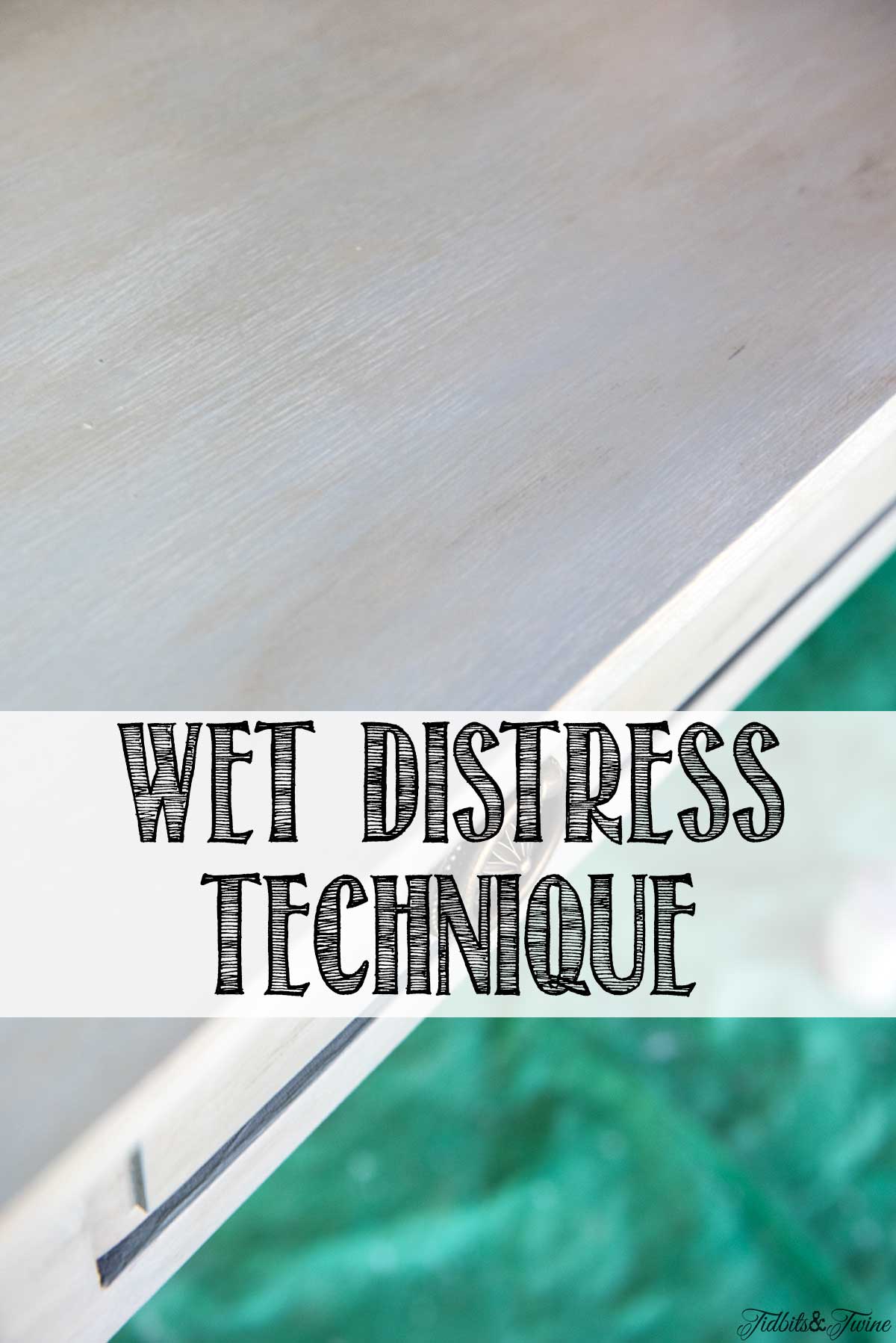 Once that was done, I added a layer of Aging Cream {video on that to come shortly} and here’s a look at the finished piece! 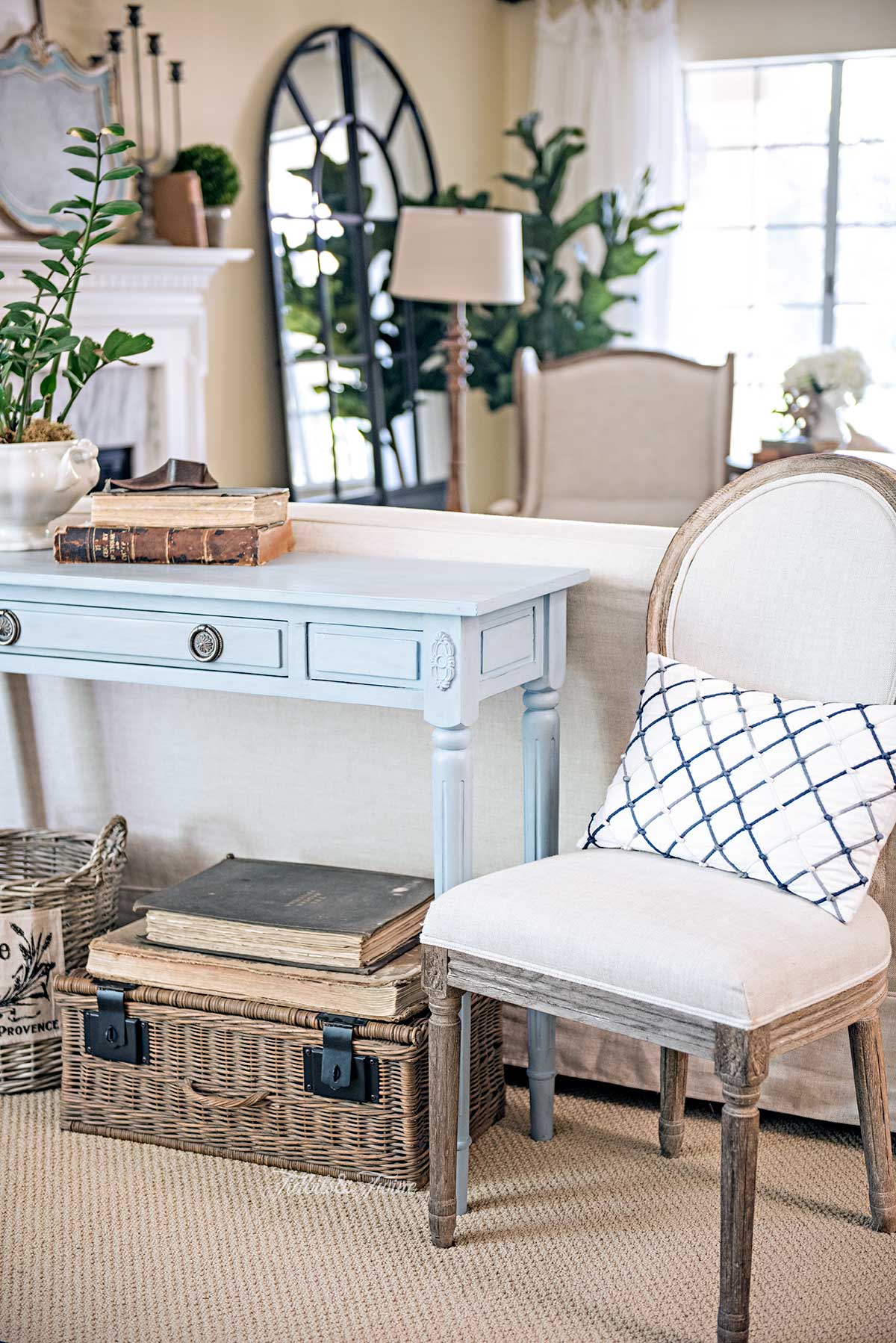 Here you can see the variation in the color, both from wet distressing the piece and adding a layer of aging cream. 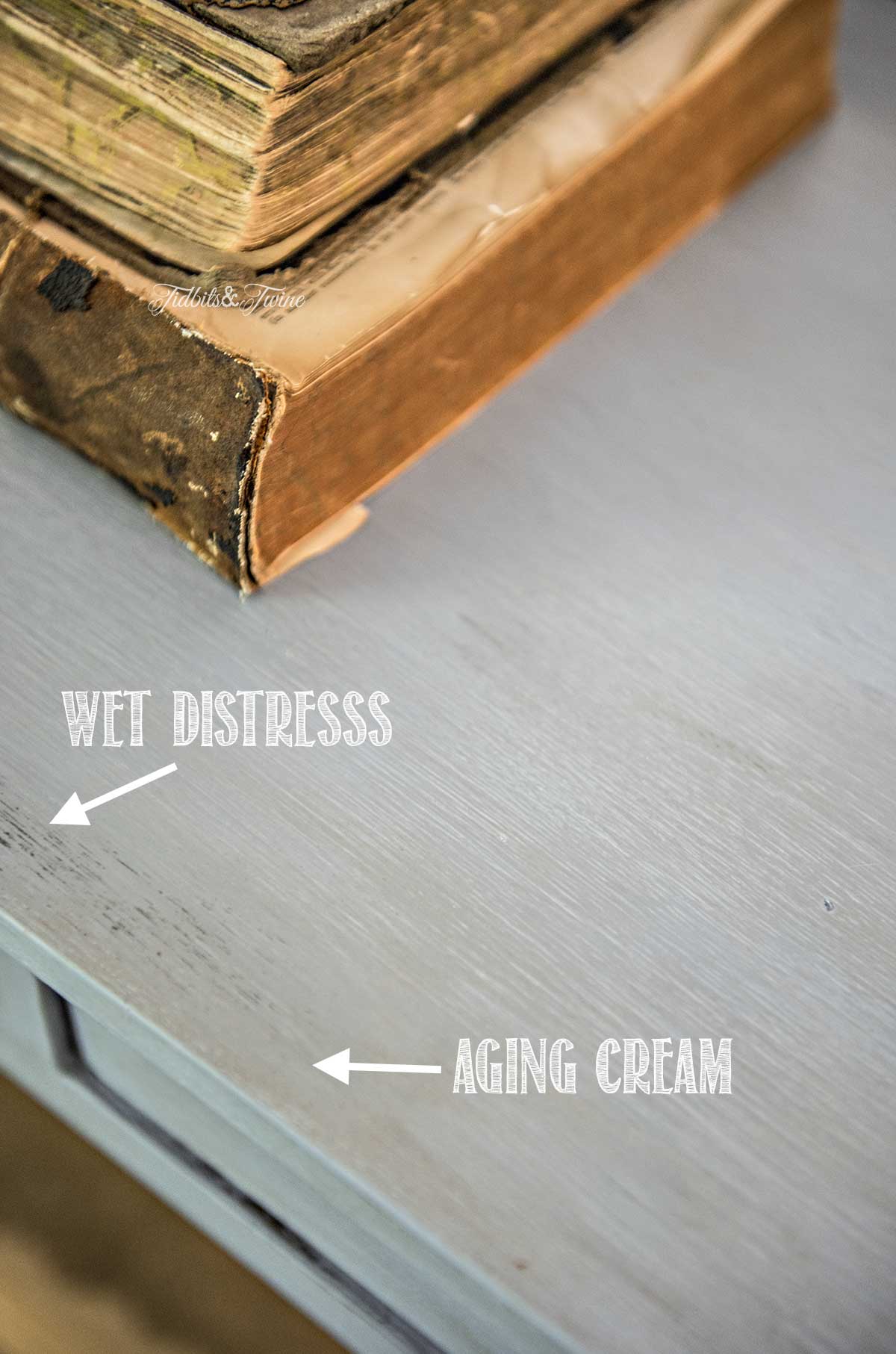 The drawer pulls that I purchased were a gun-metal gray and overall just too harsh for this piece.  I tried chalk painting them and then didn’t like how they looked.  I then used kitchen soap and a scrubber to take the paint off and whoops – I took the paint off but also the metal finish!  The good news is that I liked how it looked, so even though it was a mistake, I left it.  The paint stayed in the crevices and most of the gun-metal gray finish was rubbed off, leaving a softer color behind. :) 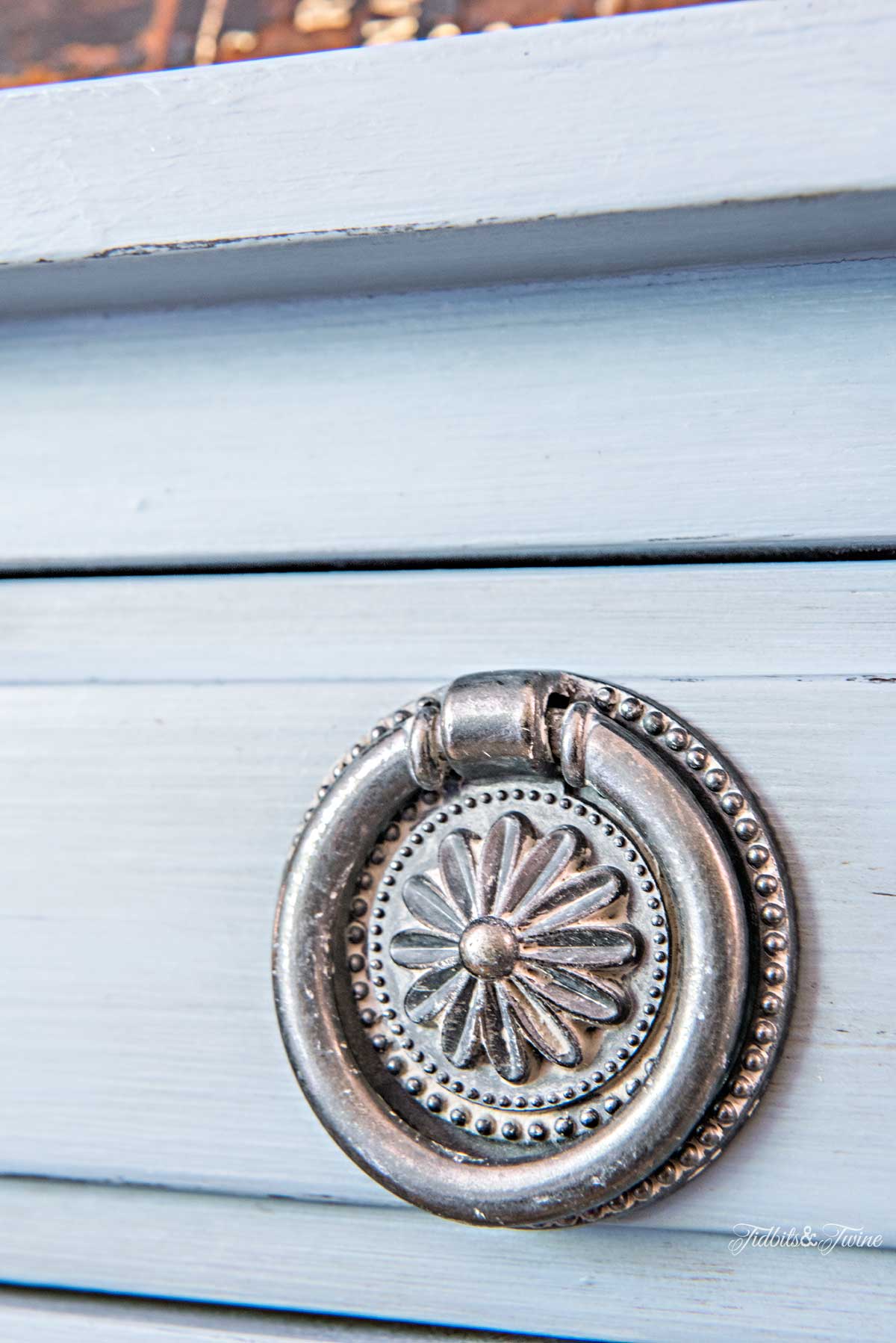 I originally bought this table to sit in my entryway, but now I think I’ll leave it here….at least for a while. 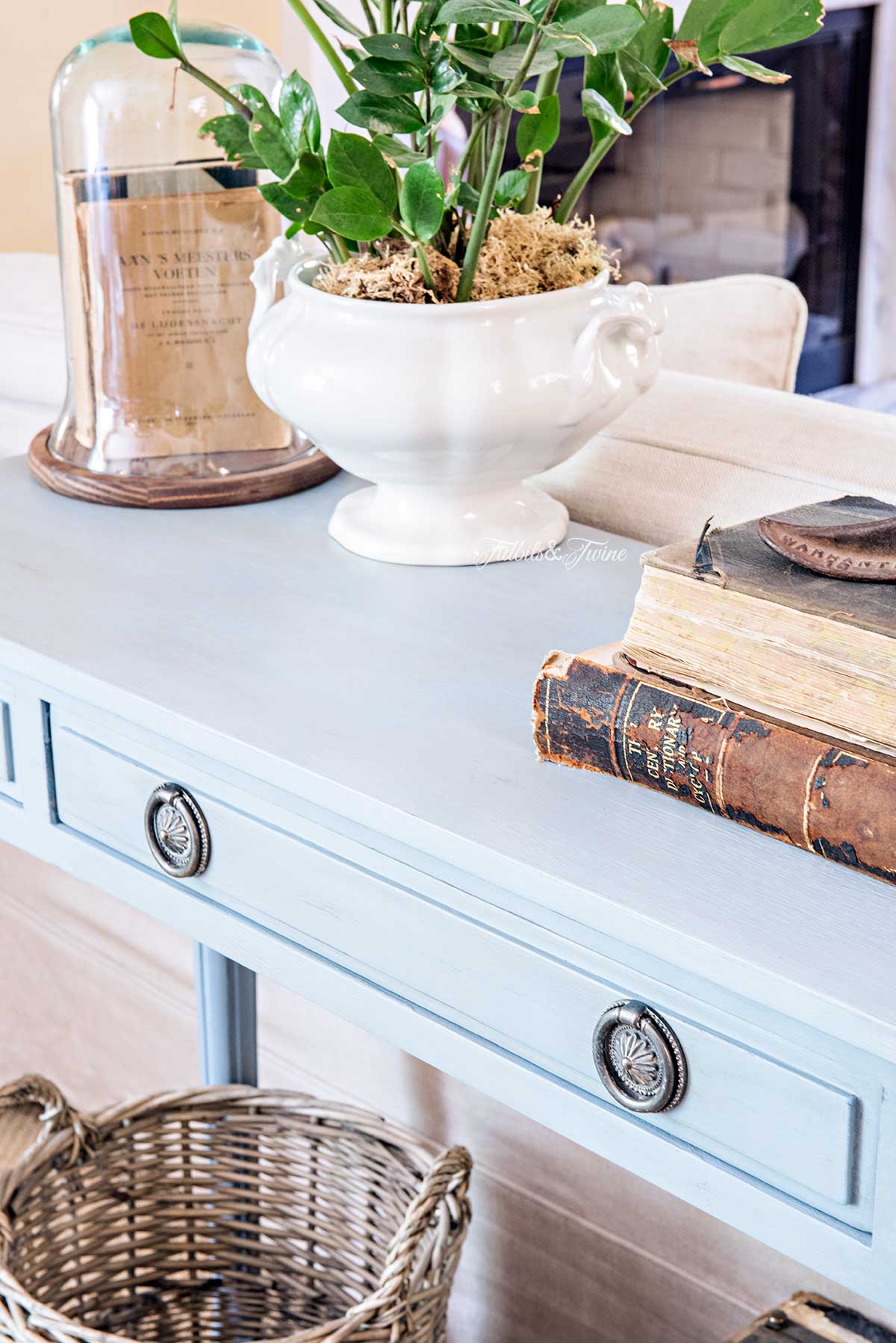 Coming up next is my FIRST EVER {and maybe last} video tutorial.  I’m camera shy so I’m a bit nervous….