Lighting can be expensive, not just to buy it but also to have someone install it!  And just like other things in our homes, our lighting choices can become outdated or just not reflective of our current decorating style.  For a cost-effective solution, before you replace anything in your home, see if there’s a way you can update it to create the look you want!

Note: This post may contain affiliate links for your convenience.

Some of you might have noticed that my dining room chandelier has been through a couple of transitions since I’ve had this blog.  When we first moved in, my style was more Mediterranean, so the Rodeo Collection Round Twelve Light chandelier was a great option for our dining room.  Pretty, right? 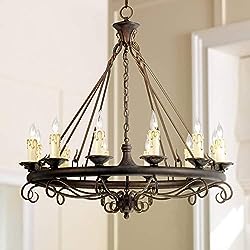 Well, after a while, I decided it was too “heavy” looking and so to make it more delicate and give it a French flair, I added crystals.  You can find the full tutorial for adding crystals {HERE}. 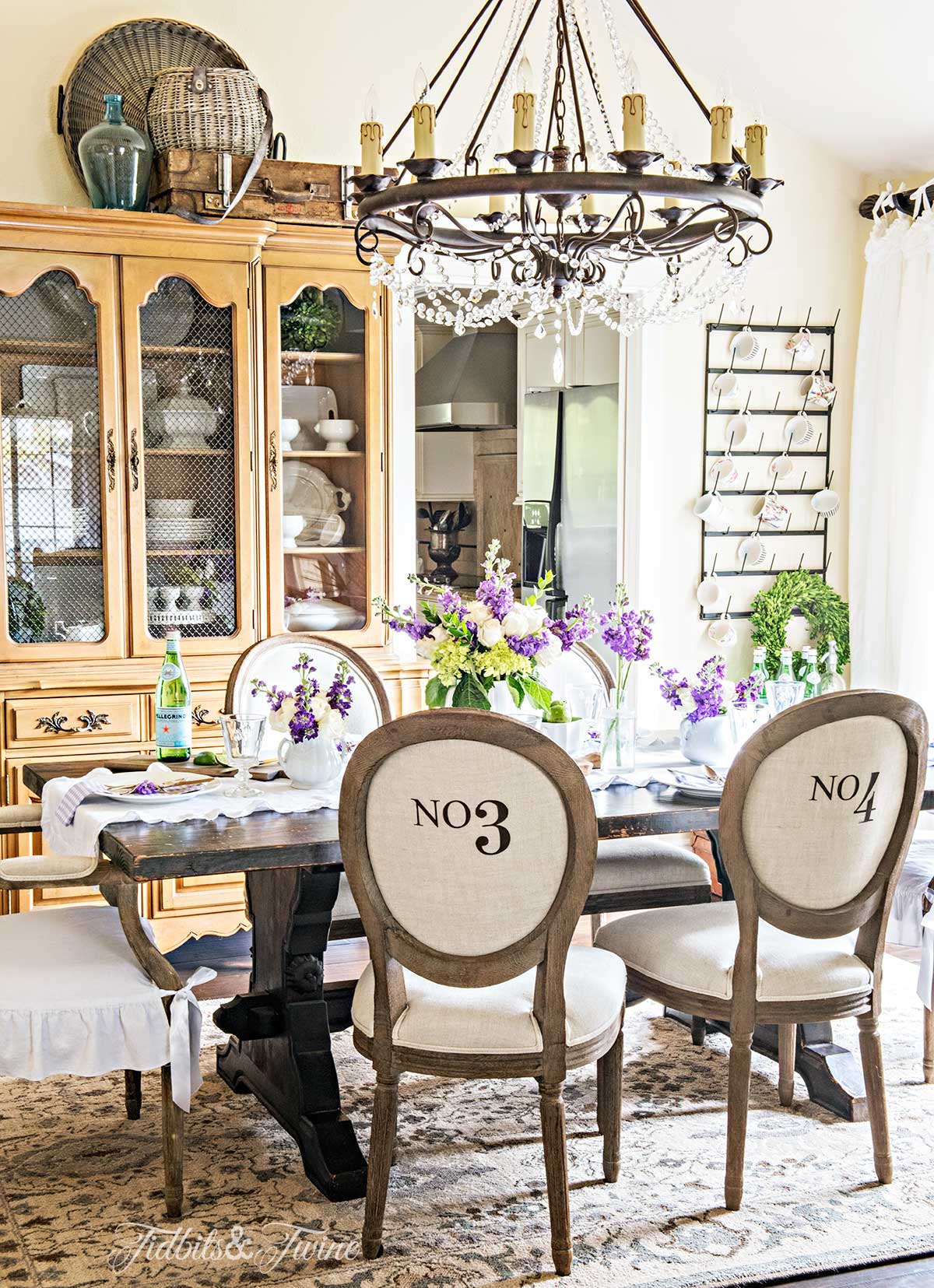 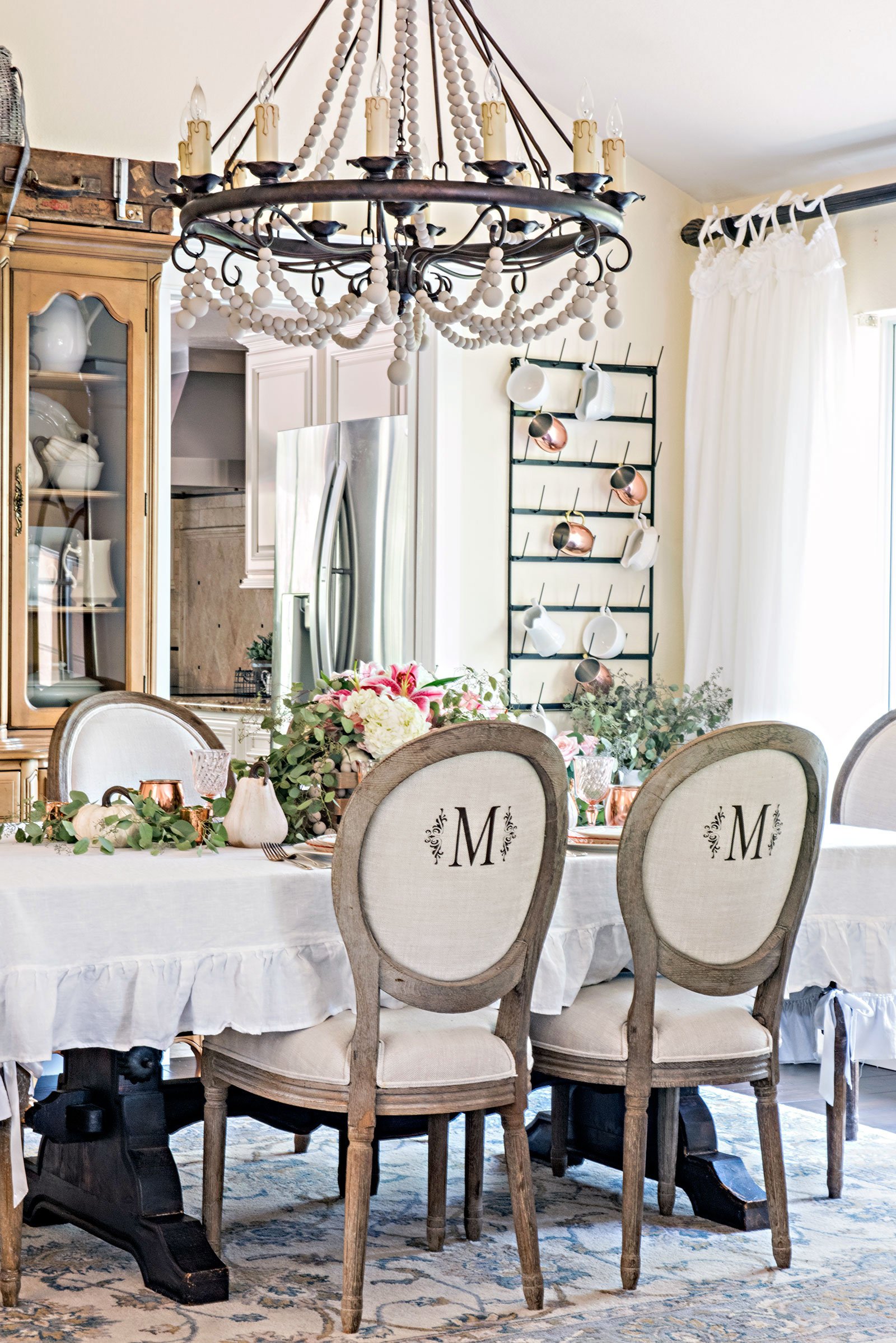 Recently, I’ve been drawn toward the Farmhouse trend and so for the Fall season, decided to give my chandelier a more Farmhouse look with the addition of beads!  I’ve been loving the looks of beaded Farmhouse chandeliers like the one below from Target, so this was my inspiration. 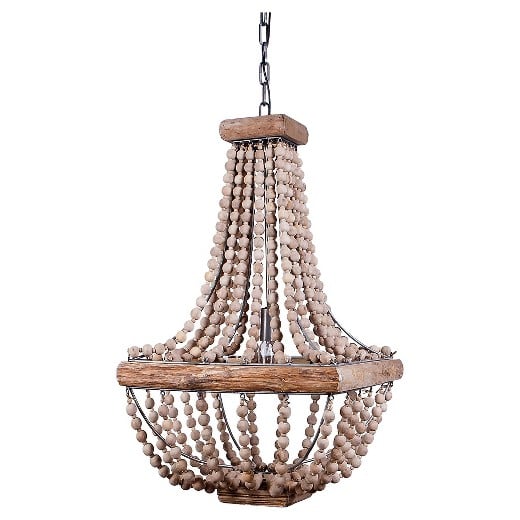 This project was an easy and inexpensive way to not only change the look of the chandelier, but the dining room in general.

Seriously, that’s it!  It really is that easy! 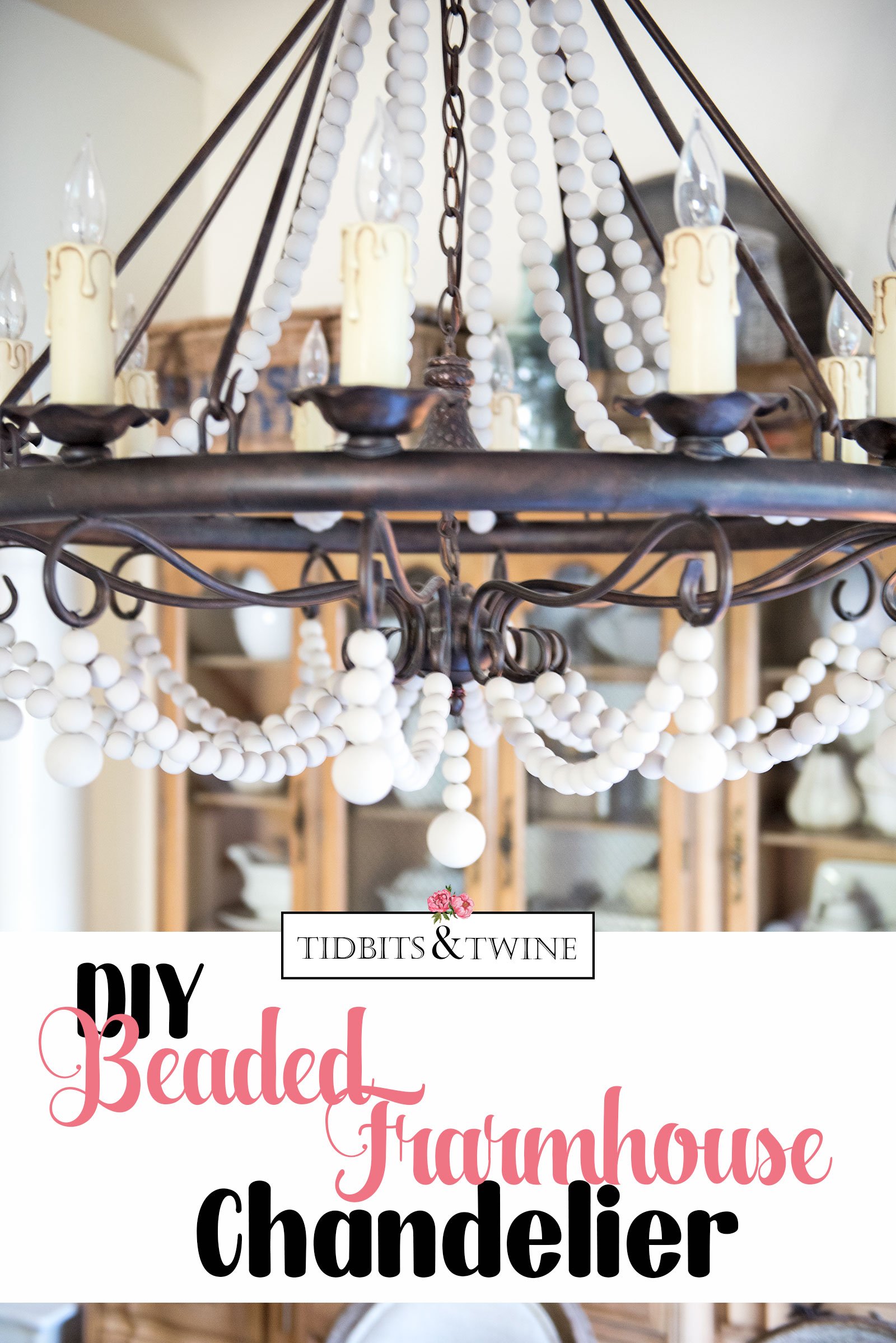 Step 1: Calculate Your # of Beads

I purchased 24mm wooden spacer beads from both Doreen’s Beads and Amazon.  Ultimately, for this size chandelier, it took almost 500 beads.  You’ll need to look at how many sections you want and how much drape you want each to have in order to calculate the total number needed.  I have 33 per section on the top of mine, and 18 per section on the bottom. 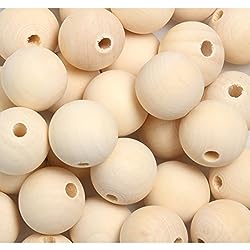 There are lots of colors to choose from, but I decided to go with plain wood.  What I didn’t realize with the batch I ordered from Doreen’s Beads is that they were lacquered, so I didn’t really like the look of them once they arrived {while less expensive than the ones from Amazon, these are no longer available}.  They were shinier and more yellow than I wanted.  Instead of returning, I decided to paint them.  Now, I wouldn’t really recommend this route, not because it’s difficult – because it isn’t – but it IS very time-consuming!  {Note, the beads from Amazon aren’t yellow or lacquered and are plain, unfinished wood.}

I used CeCe Caldwell Young Kansas Wheat chalk paint because it’s odorless and dries quickly, which meant I could sit and do this at the kitchen table while watching TV.  For each bead, I painted one end first and turned over to let it dry for 30 seconds or so.  Then I placed a wooden skewer inside the hole, which allowed me to tilt the bead and paint all sides and the top without putting my fingers on the wet paint!  When done, slide the skewer out and let dry. 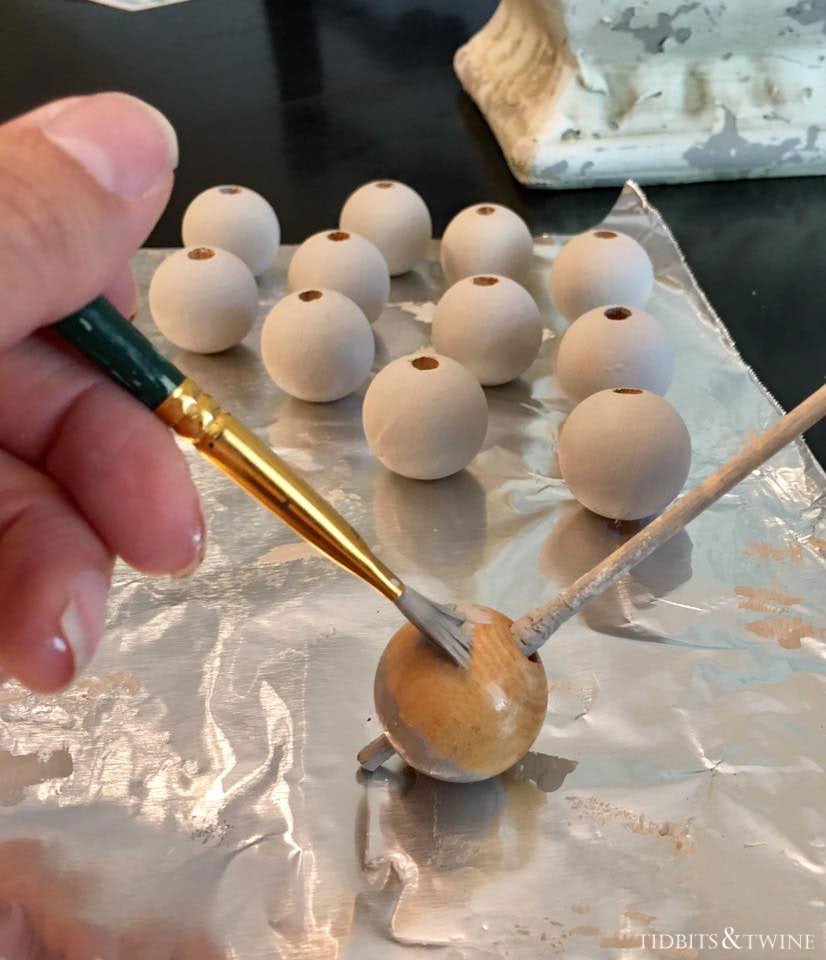 I chose to use brown 1mm wax cotton cord for this project for two reasons.  One, I needed a material that wouldn’t stretch and sag over time and that could be knotted.  Second, I chose brown so that it would blend with the bronze look of my chandelier.  I simply strung the beads on to pre-cut lengths.

For most areas, I was able to tie each side to the chandelier to create a draping effect.  At the bottom, though, I had a length of bead that was freely hanging.  The holes on these beads are quite large and I wasn’t able to make a giant knots, so instead, I double-backed through the last bead and then made a knot.  I then painted the cord that showed on the outside.

When all was said and done, I decided to add larger beads along the outer edges and one large one hanging down from the center.  The outer beads are 2″ and the center is 3″.  These larger beads didn’t have holes and I didn’t trust myself with a drill, so I simply hot glued them on!!  {I keep waiting for that moment during a dinner party when a guest get bonked on the head with a falling bead!} 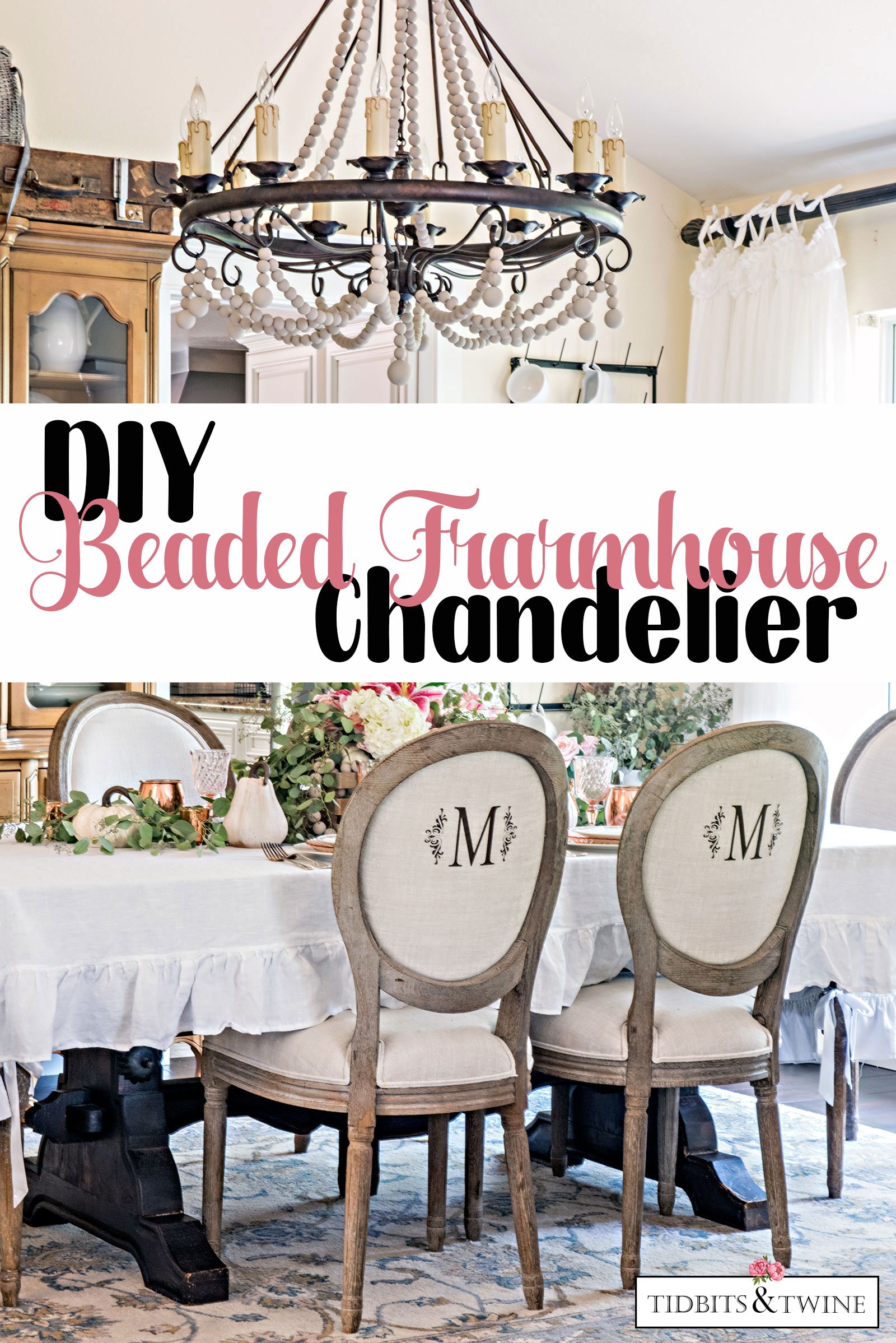 That’s it!  The total cost was $75, which seems like a lot for a craft project but it’s WAAAAY less expensive than replacing the chandelier!  And don’t worry….For those of you that liked the crystal version better, I saved them and can swap back at any time.  I love projects that aren’t permanent and can be changed over time, don’t you?!