Last Saturday we finally celebrated our daughter’s 6th birthday with a Despicable Me Minion theme.  It was a whirlwind day of fun, food and games with 13 little Minion friends!

I only had about 2 weeks to plan and execute, so almost all of the decorations were easy DIY projects thanks to all of the super talented people who have hosted Despicable Me parties before me and who provided their files for {free}.  All I needed was a computer, a printer, a Sharpie, glue and some 110# cardstock!  I’ve included links to all of the sources below.

We hand-delivered her invitations since we had attached a rainbow lolipop to each one (to represent the rainbow party blowers that the Minions used in the movie preview).  I ordered the invitation from Amber at Sprinkles of Sugar on Etsy.  Amber is super nice and she delivered the invites quickly, so I’d highly recommend her and would happily use her again in the future! 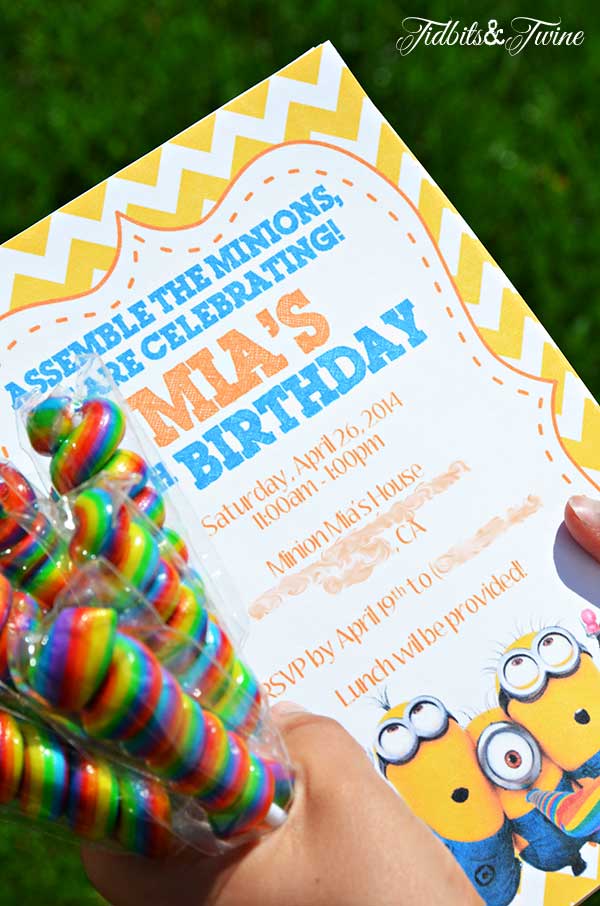 When the kids arrived, they were greeted at the Minion-wrapped door by Lucy Wilde of the AVL {the Anti-Villan League} and Gru. Admittedly, orange hair is decidedly not my color and this wig makes me look more like Daphne from Scooby Doo rather than Lucy, but the kids thought it was funny anyway. 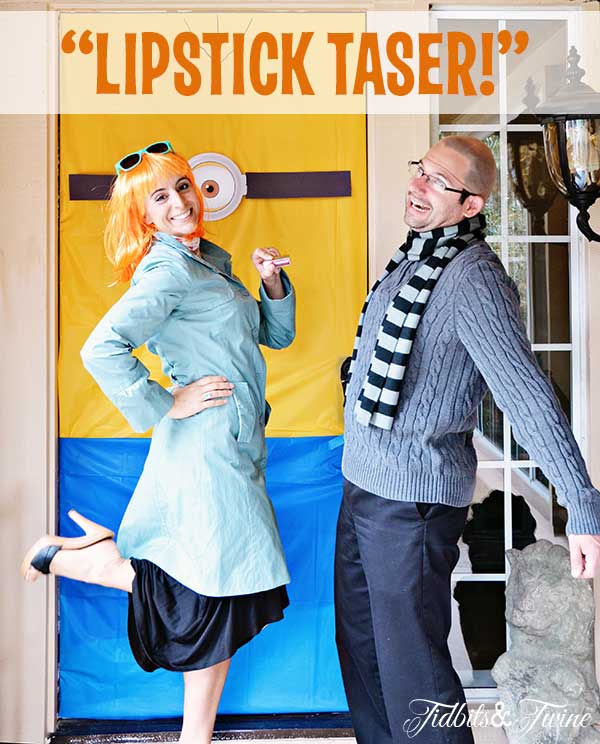 The story was that Lucy had received reports on an authorized party in the backyard and needed to enlist the help of the guests!  Each child was given a DIY Minion hat in order to transform them into Special Agent Minions!

The Minion hats were made from yellow plastic construction hats purchased at Party City.  I added black pipe cleaners to the top {in three different hair styles}, black ribbon for the band of the goggles, a pint-sized Mason jar lid for the rim of the goggle, and I created an eye in Photoshop.  {You can download the eyeball file here.} 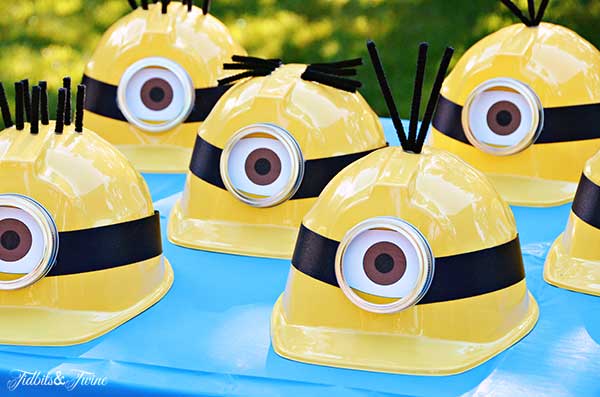 Once in the backyard, the kids were given empty goodie bags made from plain yellow bags with Minion faces glued on.  The bags would hold their prizes from all of the games for them to take home! 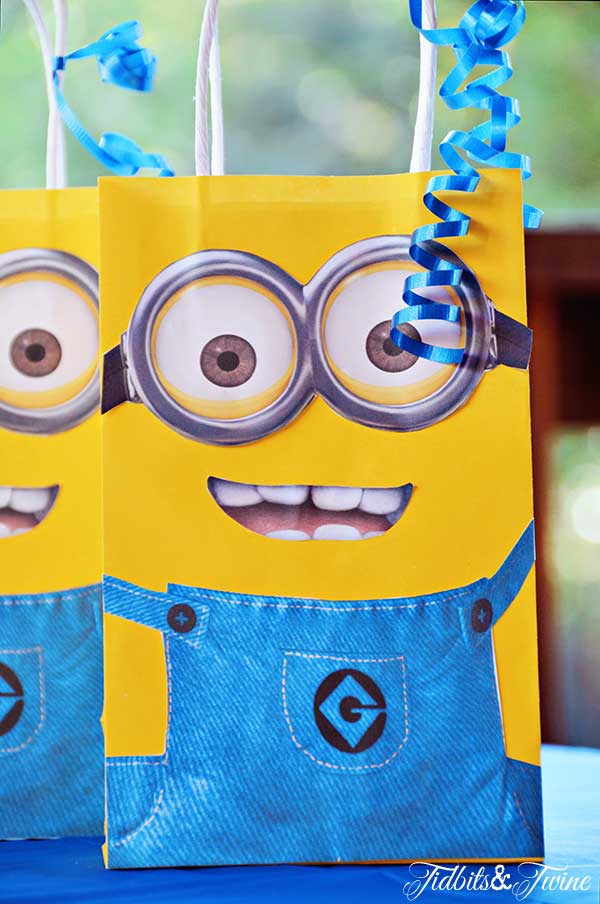 The first game was an egg hunt.  Each child had to find 4 plastic Minion eggs numbered 1-4, with each numbered egg containing a different prize.  Once collected, the eggs and prizes went into their goodie bags and they were given a Special Agent Minion tattoo.  The scavenger hunt was a great way to give the kids something to do while we waited for everyone to arrive. 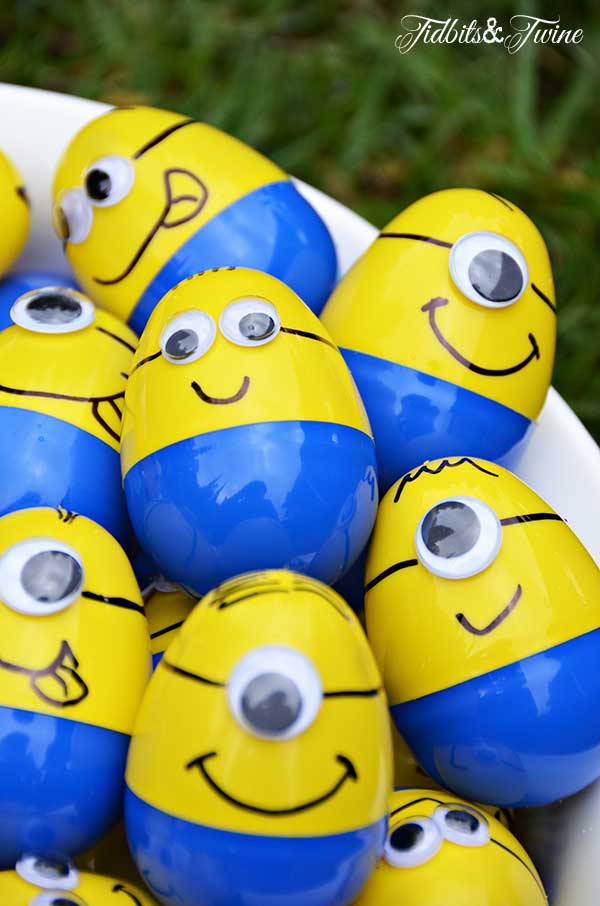 2. Pin the Goggles on the Minion

I made a simple poster using PhotoShop to play Pin the Goggles on the Minion.  Each child was given a pair of goggles with their name on it and we used double-sided tape to attach the goggles to the poster. Here’s a look at the small version of the poster but you can download the full size version here. 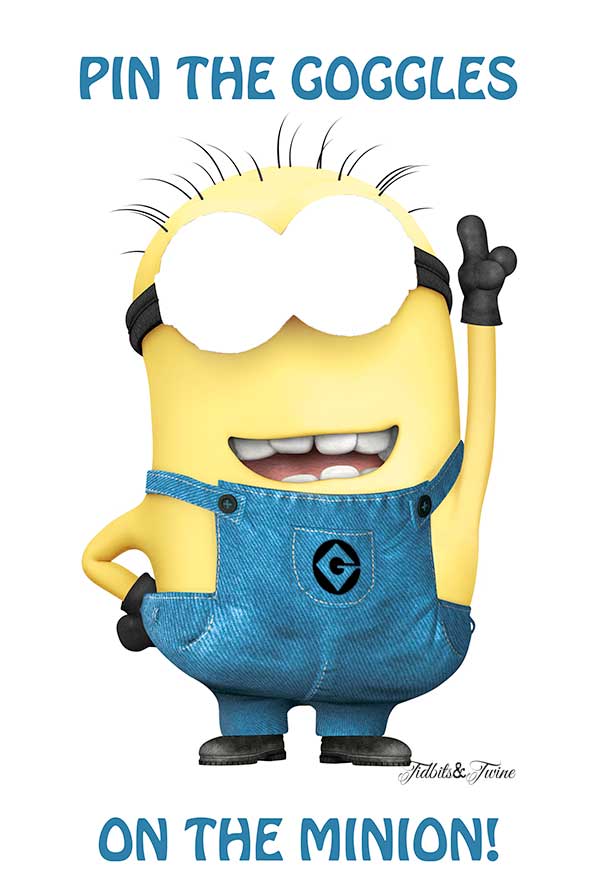 Just like in the movie, the kids could play a carnival game of Space Killer!  Plucky Momo created awesome replica images of the spaceships from the movie, so we printed and taped them to the inside of the glass door and then let the kids blast dart guns at them.  {Dart guns, not….}  :)

This was a good ol’ fashioned game of freeze dance using music from the movie soundtrack, but whenever we stopped the music, we pretended to blast them with the Freeze Ray.

We purchased a Minion pinata from Party City.

I had every intention of taking a picture of it; unfortunately, by the time I found my camera, this was all that was left!  All of the candy that the kids collected was added to their goodie bag. 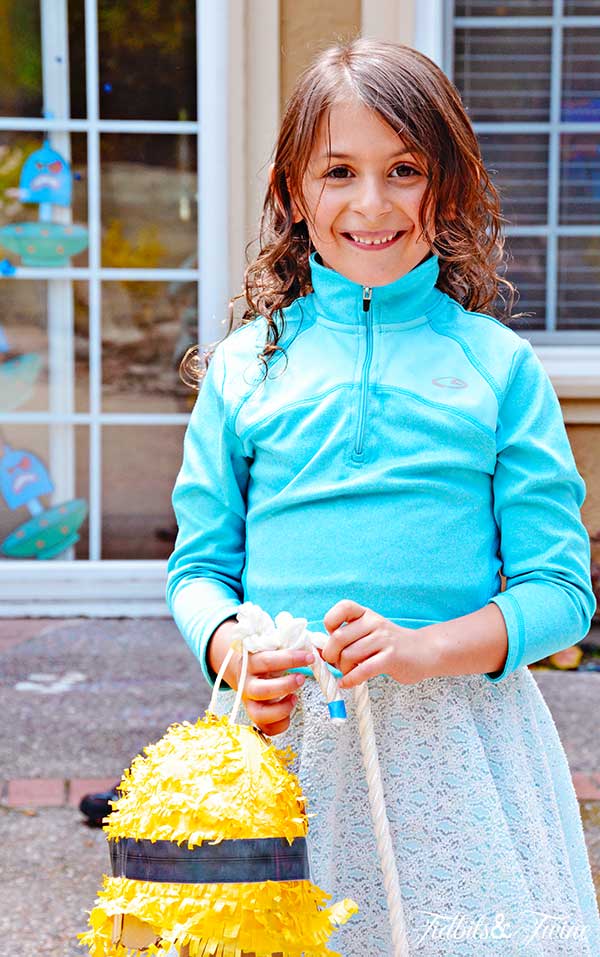 I layed out all of the food buffet-style for the kids to help themselves.  They feasted on: 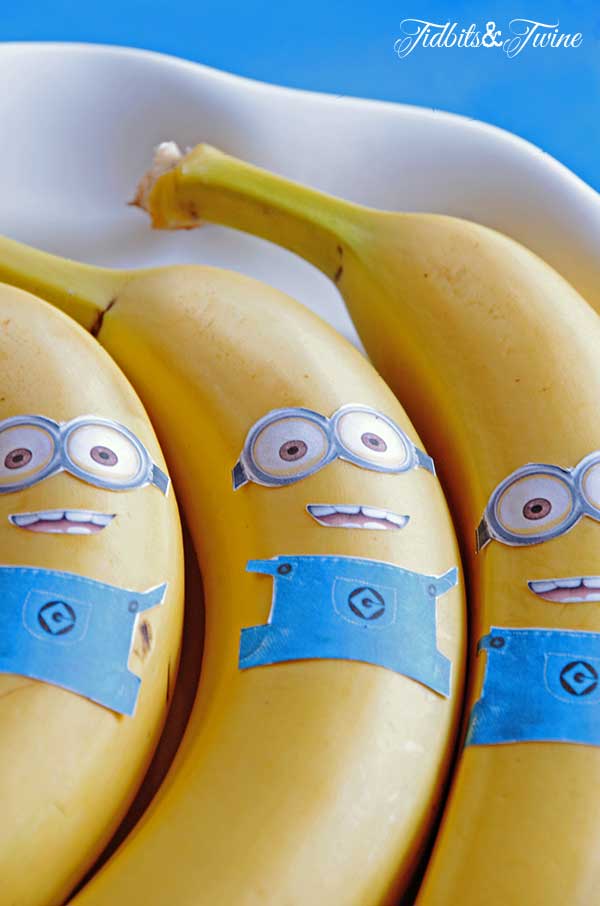 We did simple blue tablecloths with the Despicable Me theme paper plates from Party City.  I also printed and cut out an eye to wrap around the napkins and added a face to the cups. 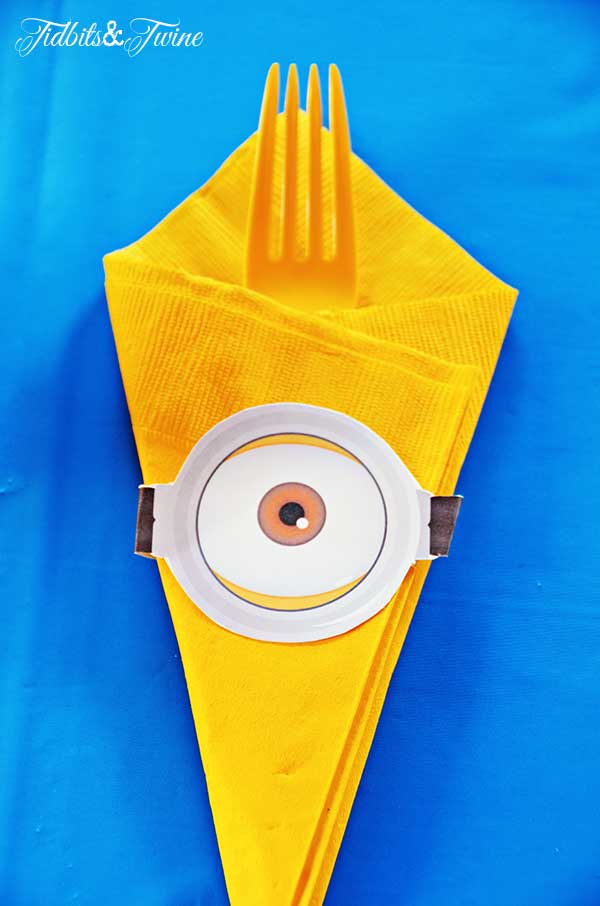 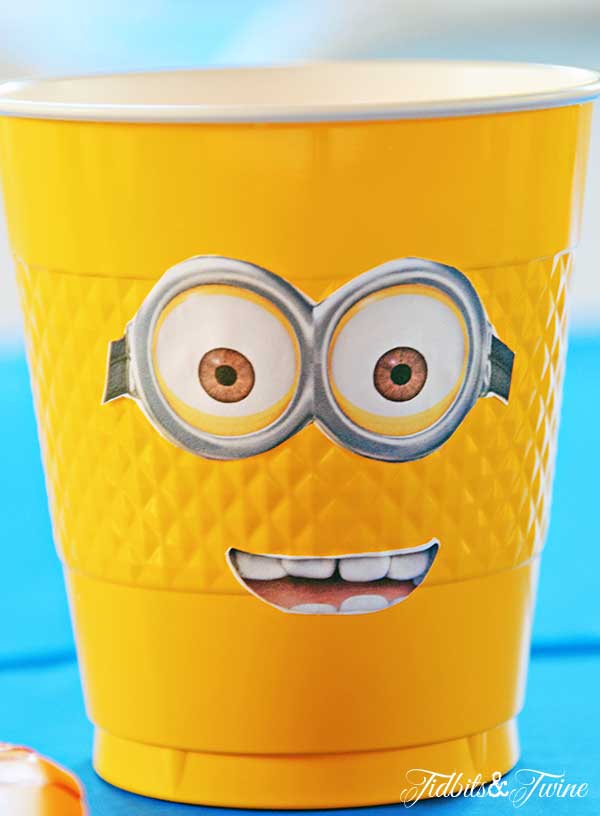 Sadly, just like in Despicable Me 2, the fairy princess couldn’t make it to our party. Thankfully, Gruzinkerbell was able to step in to read a story to all of the kids and sing Happy Birthday during cake time.  My husband was willing to dress up as Gruzinkerbell for the kids since he knew they would think it was funny, but he made me promise not to post any pictures here.  :)  For those of you that don’t know who Gruziinkerbell is, here’s a photo from the movie.

Before leaving, I also added some Minion goggles to their goodie bags, as well as their very own Freeze Ray {a squirt gun}.  I think all of the kids had fun and as soon as the last guest left, I changed into my PJ’s and went to bed….and it was only 2:00 PM!

Happy Birthday, my little Minion!  Until next year!!!

Did I miss a file or source?  Please let me know so that I can add it!