Whew!  What a week I’ve had!  Yesterday was my son’s 9th birthday and he asked to have a backyard campout with a few of his friends.  Originally, I planned to keep it very simple, but three days before, decided that I should put a little effort into making it feel like an actual campout.  And so, let the craziness begin!  It took me three full days of frantic shopping, crafting and cleaning, but I pulled it off! 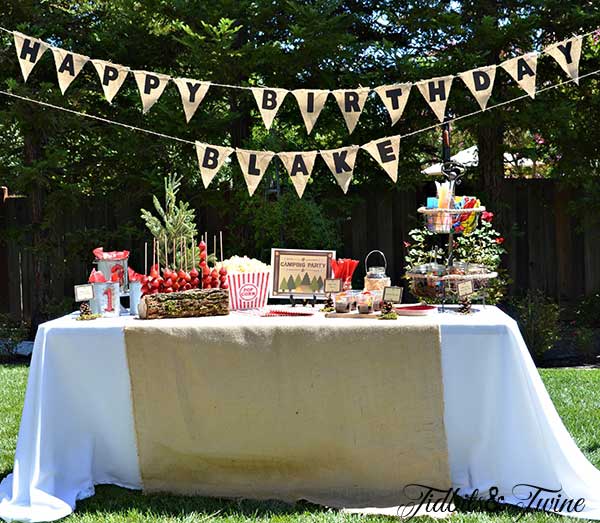 It all started about four weeks ago when I ordered some invitations off of Etsy (this is the one and only thing I planned in advance!).  I chose this particular design because it included a trail map that could be customized for the party so that the guests could see exactly what we were going to do.

Instead of mailing them, we decided to hand-deliver them along with a snack bag of s’mores, which consisted of Golden Grahams, mini chocolate chips and mini marshmallows. 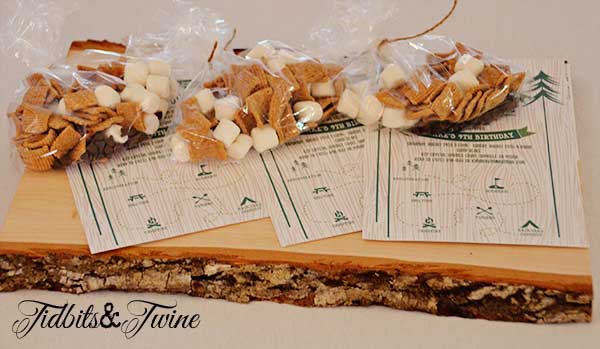 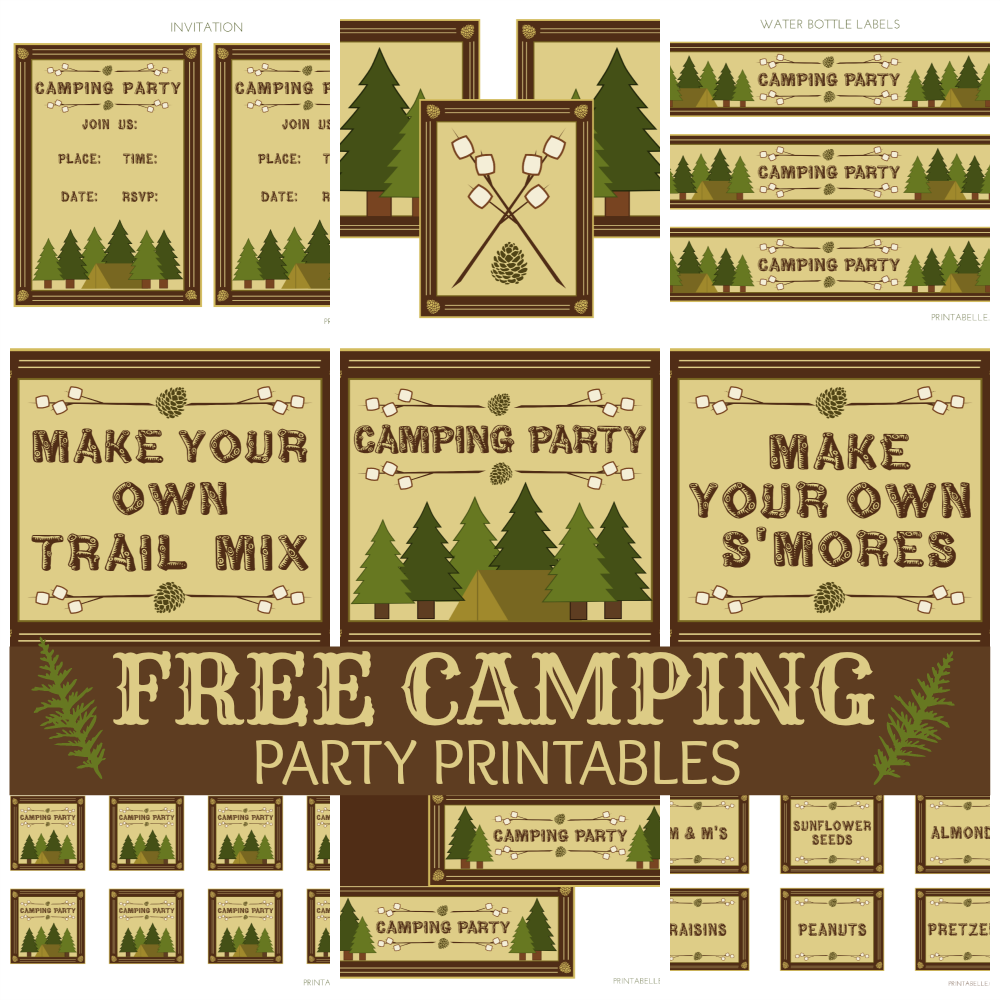 I also created several trail marker signs using a wooden fence board cut into thirds hammered to a wooden stake.  The sign at the front door led guests into the house for Camper Registration. 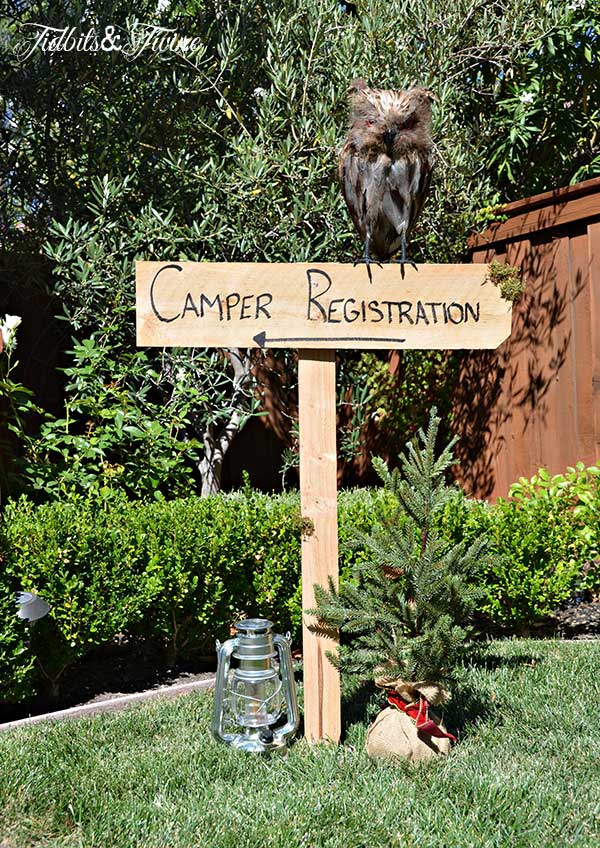 And I was so lucky that this owl landed on the sign just in time for me to snap a photo! 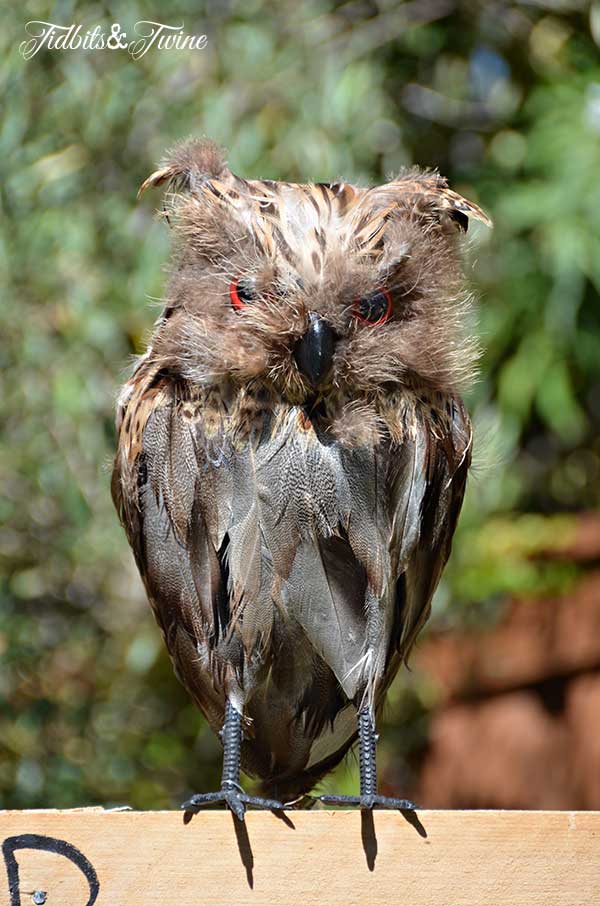 Once the kids arrived, we took them to a local miniature golf place and let them golf and play arcade games for a few hours.  We had a BBQ when we returned home, followed by a neighborhood trail map scavenger hunt.  For the scavenger hunt, I hid colored shapes and prizes at different locations around our court (with the homeowners’ permissions, of course!).  I’ll post more about the scavenger hunt at another time.   After the scavenger hunt, we had a pinata and a silly string fight, and then it was time for the dessert table.

For the table decorations, I used just a simple white tablecloth with a piece of burlap over it (I already had the burlap since I plan to use it in my guest room).  I then used extra burlap to make the banner that hung above the table.  I also added the menu cards using pinecones glued to cardboard (for stability), with moss and sticks.  Lastly, I added a length of burlap around a mason jar and created a handle to make a lantern out of it.

For food, the dessert table included a s’more station… 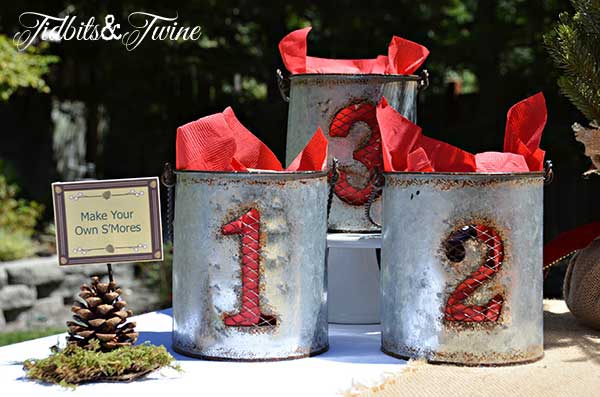 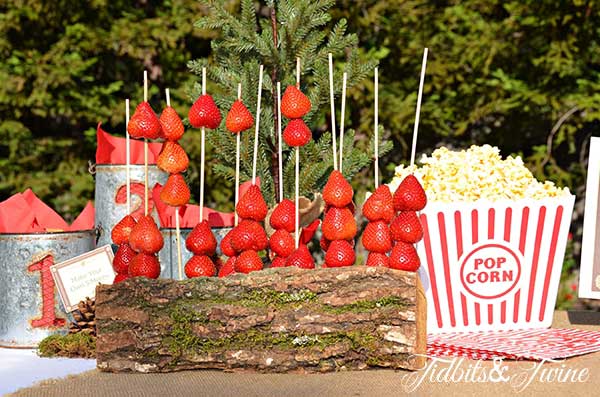 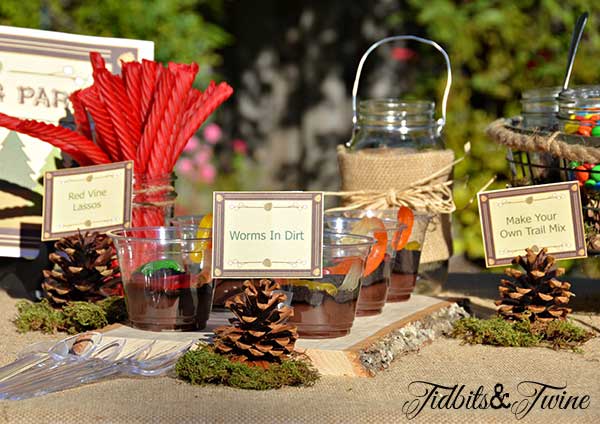 …and a trail mix station.  I used my two-tier basket to hold the trail mix items on the bottom and miscellaneous party toys on the top (in this case, silly string, glow bracelets and punch balloons). 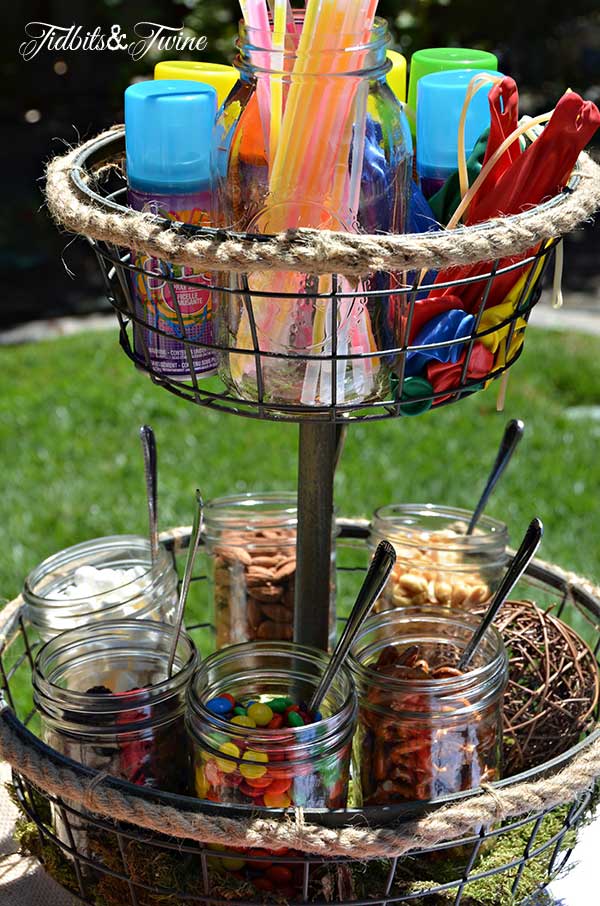 We set up tents on the lawn and my wonderful husband, who is such a good sport, slept outside in a small tent next to the kids. 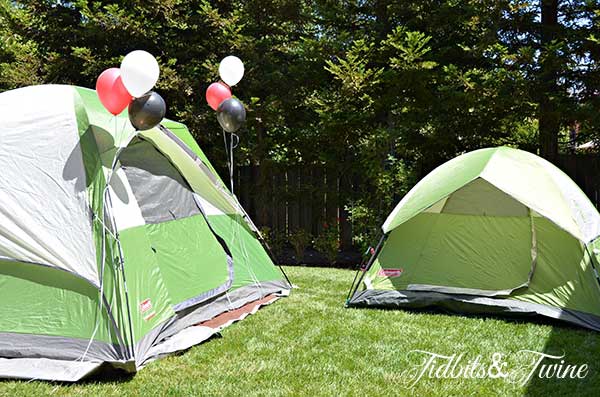 Instead of a birthday cake (which we did on his actual birthday), we lit giant marshmallows on fire and sang Happy Birthday while they burned.  And then began the process of trying to get all of the boys to go to bed.  I’m sure you can imagine how well that went…. :)  The next morning, we made pancakes and my son got a special “9” pancake for his birthday.

When the kids left in the morning, they each got a knapsack that was a red bandana full of goodies that was wrapped up and tied to a stick.  I used the Printabelle cupcake toppers as thank you tags tied to the bandana and wrote “Thank You for Coming” on the back. 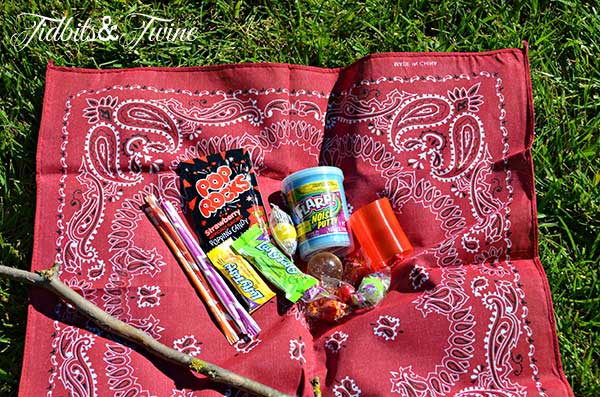 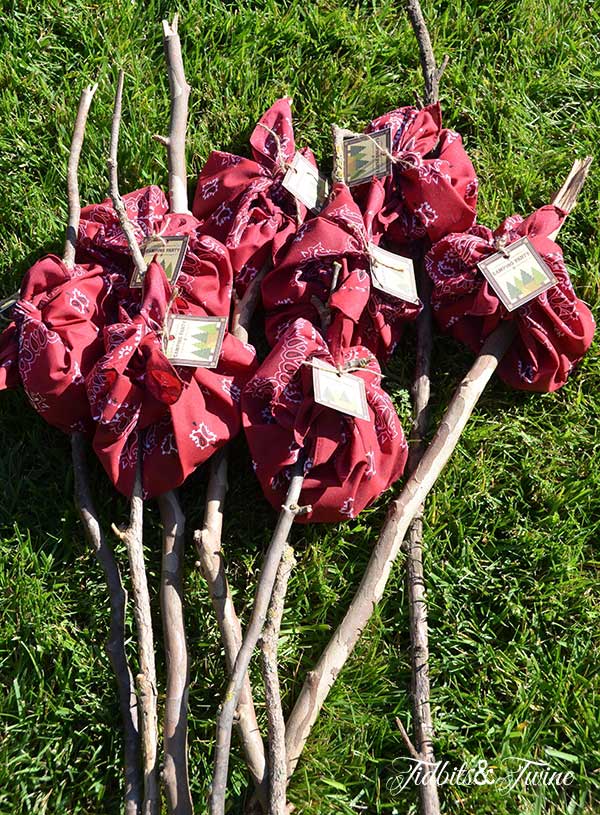 I think everyone had a great time, but I am exhausted!  Now it’s time to gear up for the first day of school tomorrow! 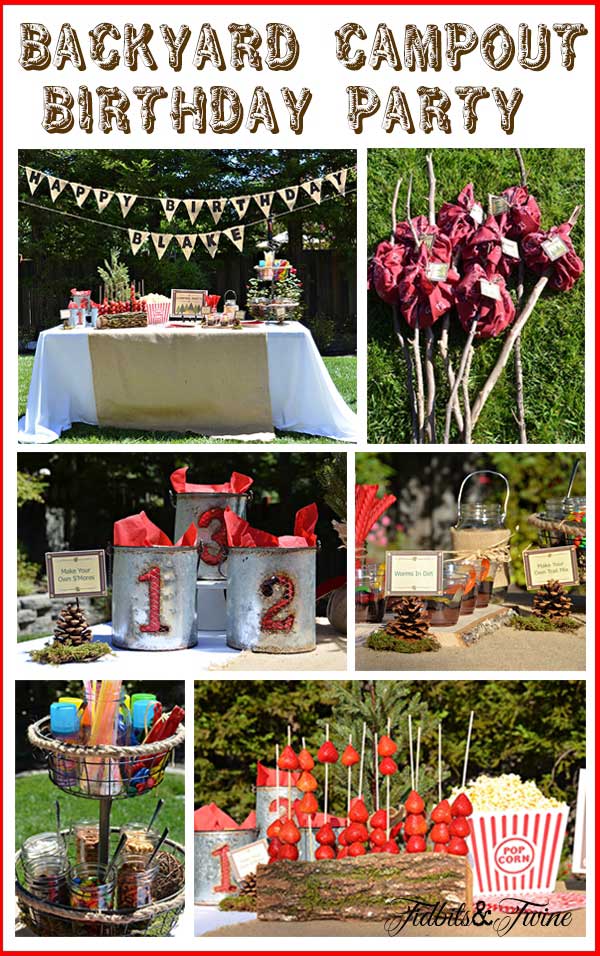