Today is the second part of Decorating Styles Defined where we’ll be looking at the definitions of Hollywood Regency, Eclectic, and French Country.  {If you missed Part 1, you can read it here.}  I’ve said this before but it bears repeating, I don’t believe that anyone has to follow standard styles of decorating or that you have to choose just one!  Part of what makes a house a home is that it reflects your individual style, so I’m a big believer in decorating in whatever style you like best.  That being said, I still think it’s helpful to understand some of the fundamentals because sometimes, knowing the rules makes it easier to break them!  {And don’t we all secretly enjoy breaking the rules sometimes??} 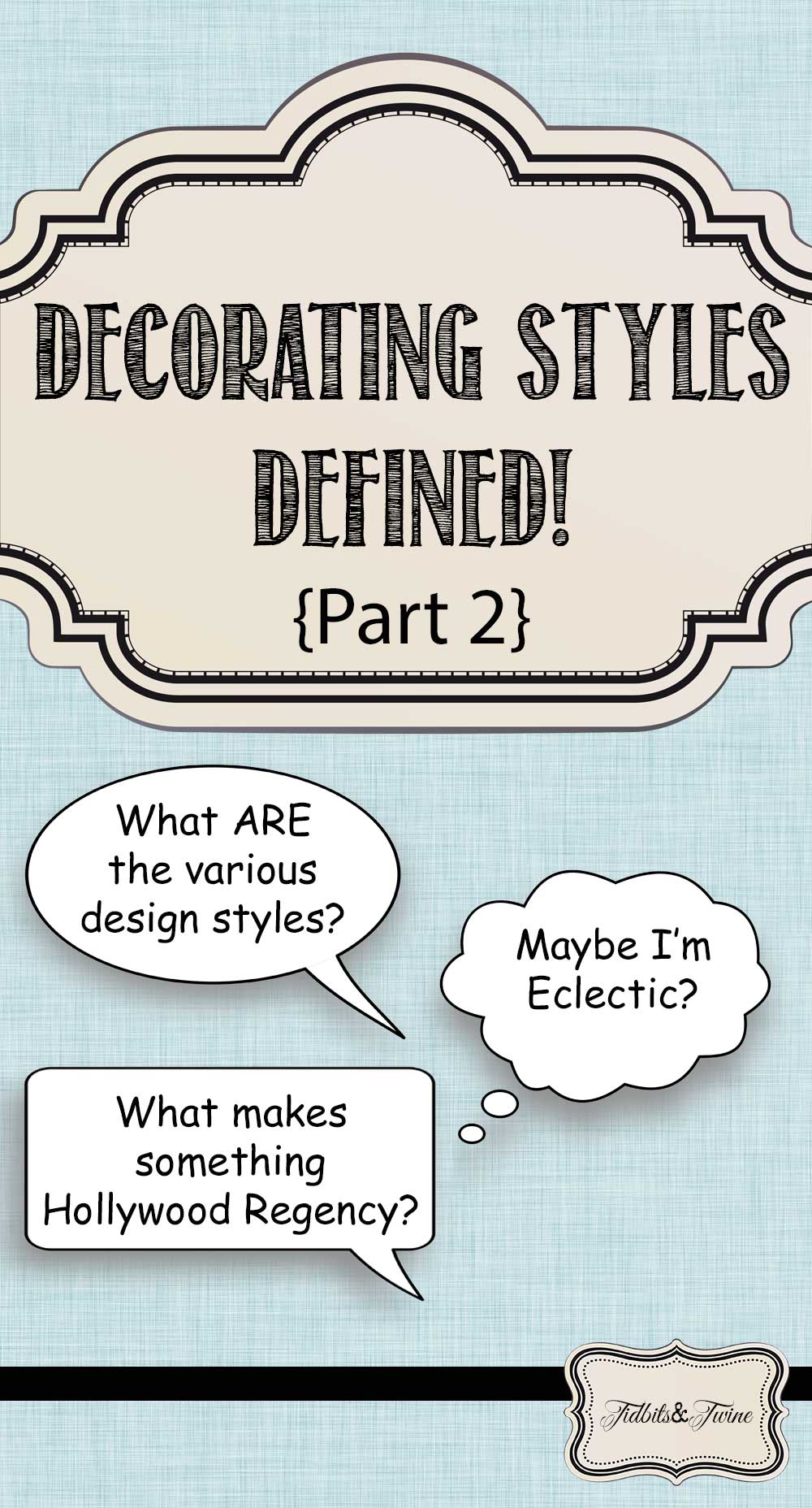 An Eclectic style of decorating is just as it sounds – a little bit of this mixed with a little bit of that to create a look that is uniquely you!  It’s a curated look that doesn’t reflect one particular style, but a mix that grows and evolves over time as your tastes change.  Done carefully and with intent, you can create a style all of your own; however, done without planning, the mismatch of items can look chaotic and cluttered, so it’s important to know both HOW and WHAT to mix and match.  {Truth be told, I prefer the terms “curated” or “collected” over the word “eclectic” because they sound more intentional, but that’s just my opinion!}

The key to an Eclectic style is not to look for things that match, but rather, things that go together.  This means that you can utilize dissimilar objects {in fact, contrasting objects work great} so long they all have at least one thing in comment, whether it’s their coloring, scale, finish, size, shape, etc.  This is really an important element of an Eclectic style – everything has at least one thing in common with something else in the room!

One tricky thing about describing your style as Eclectic, though, is that because it is so individualized, there’s no way for someone to get a clear image in their mind as to your style.  You could primarily mix Traditional with Contemporary, or Modern with Industrial, and while both would be called Eclectic, they would have a very different look!

For tips on Mixing and Matching to create a cohesive Eclectic look, you can refer to these posts:

This style of decorating tends to be very dramatic and glamorous, with bold statement pieces and lots of shine, whether it be from mirrors, crystal embellishments, or lacquered furniture pieces.  Upholstered items are very generous and luxe, such as velvet, satin, or leather.  The colors used in a Hollywood Regency style are high-contrast and bold, but usually limited to a single accent color so that the look remains very refined.

Mirrors, mirrors, everywhere!  Mirrored furniture plays a big part in the design of the rooms, but one mirrored surface is never enough!  Several mirrors {or mirrored surfaces} might be mixed together, particularly mirrors that have a mirrored frame!  The brighter it shines, the better!

Furniture lines are a mix of curved and linear to create a mix of femininity and masculinity in the room.  Pieces typically reflect a lot of details, but they are done in a more delicate and intricate way so that the pieces remain looking small in scale.  While there will be more accessories than will be found in a Modern room, they won’t look overly busy and usually won’t constitute a collection, as is often the case in a Traditional room.

A French country style of decorating takes its cue from an old-world, European influence that strikes a balance between beauty and function.  Hallmarks of this style of decorating include time-worn furnishings, natural textures {and lots of them}, warm, patinaed metal finishes, and a color palette that features muted hues pulled from nature.  Furniture pieces have graceful curves and details that give rooms and elegant look, but the aged appearance helps keep rooms from feeling formal and makes them a bit casual and very welcoming.

Pieces aren’t matchy-matchy in French Country design because they are meant to look collected, or handed down from generation to generation, but they shape and silhouette of the pieces will likely be the same.  Warm wood tones and chippy paints are abundant, as are upholstered pieces.  Patterns are freely mixed but typically include toile, gingham and florals, often in the same color palette.

Architectural details are also common in this style of decorating, but more often, they are not purely decorative but more functional.  Think paneled doors with intricate knob backplates and rosettes, beams, corbels, and carved stone fireplaces.

I typically call my style Casual Elegance, but it’s really Eclectic because I mix French Country, Transitional, and a few other styles.

What do you call your style?