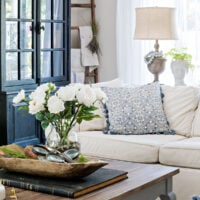 Not sure what style of curtain is right for you? Here are explanations and examples of 15 types of curtain tops. Find the perfect one for your home!

Every so often, I get an email from a reader asking me about my white curtains. They don’t have a typical curtain top on them and readers are not sure what my window treatments are called.

As if deciding on the width, length, color, and fabric weren’t enough, there’s yet another decision to be made! What type of curtain top do you want! It is almost unbelievable how many different types of curtain tops there are.

To make things easier for you, I’ve broken down 15 popular types of curtain tops with explanations to take the guesswork out of your shopping.

What is a Curtain Top?

I’m using the word “top” because that’s what the majority of people say; however, that’s not the technical term. The correct term is a curtain heading. But regardless of whether you call it the top or the heading, the meaning is the same.

The curtain top is literally the top section of the curtain that attaches to the rod. There are several different ways to attach a curtain to a curtain rod depending on the style of curtain top you choose.

Does the Curtain Top Matter

Yes, the type of curtain top you have affects the overall look of your curtain and your room. Some curtain tops have a formal look while others are relaxed. Some look contemporary and others look traditional.

Oftentimes ready-made curtains don’t have top options available, but some retailers will give you several choices. And of course, if you’re having your curtains custom-made, you can specify exactly which curtain top you want.

For purposes of this article, I’m using the term “curtain” because that’s become the common word used interchangeably by many. In reality, curtains and drapes do have distinct differences.

Curtains are fabric panels, often sold in sets of two. Curtains come in a wide variety of lengths and widths, as well as colors. But the one thing all curtains have in common is that they are not lined and are made of lightweight fabric, including sheers. They hang from a drapery rod and are the curtain tops are typically either pole pocket, tap top, grommet, or curtain rings. Curtain lengths can vary from floor length curtains to partial length, like cafe curtains and sill-length curtains.

Drapes (or draperies) on the other hand, are made of heavier material and are lined. Drapes tend to have pleated tops more so than curtains and can be sold as single panels. They hang from a rod as well, but are always floor-length. The term blackout curtains, therefore, is actually incorrect since blackout curtains are lined, they are technically draperies and are perfect for theaters and bedrooms.

Who knew there were so many types of curtain tops to choose from! While there are combinations of those listed below and different names for these in different countries, these are the most popular styles.

I’m starting with a flat panel curtain because it’s the simplest of those on this list. A flat panel is perfectly flat at the top, with no pocket for a pole, no pleating, or anything else. It will have just a simple hem like the sides and bottom.

To hang a flat panel curtain, you’ll need drapery rings with either clips or pins. The easiest attachment style will be to use the clips.

Flat panels look nice when bunched in the open position. When pulled closed, they lose their folds and the panels look completely flat. You don’t typically see this style (or at least not when it’s closed) in magazines or designer portfolios because the curtain top doesn’t have the same eye-catching look like others on this list.

This is probably the most common style of curtain top, especially for ready-made curtains. The top includes a wide hem, or pocket, that slides over a curtain rod to conceal it. When open, the curtain has a gathered look. When closed, it looks like a flat panel.

Depending on the material and size of the pocket, sometimes the curtain drags on the pole a bit as it’s being closed and opened. Ensure that your rod is anchored securely to the wall if you choose this type of curtain top.

A pole pocket curtain top has a very casual and simple look.

A hook belt curtain is similar to a flat panel but has a band sewn horizontally across the top on the back. The band allows for curtain pins to be inserted so that the curtain can hang from a rod on rings, but using hidden pins instead of clips.

An alternative to a band is to include hook looks at regular intervals in which to slide curtain pins. It achieves the same look with just a slightly different approach.

From the front, you’ll see the rings on the curtain rod, but no clips or curtain pins for a clean and classic look.

Technically, ruched curtains aren’t a separate curtain top type, but since their look is unique I wanted to give them their own section. These curtains typically hang via a pole pocket or rings, which is why they aren’t technically a type of curtain top.

Ruched curtains have vertical gathers at the top of the curtain heading to give them an elegant look. The ruching at the top almost creates the look of a valance, drawing your eye upward.

Grommet top curtains (sometimes called eyelet curtains) have large rings embedded into the top of the curtain fabric. These rings slip over the curtain rod for easy hanging. Grommet curtains are often available as ready-made curtains in a wide variety of colors and fabrics, not to mention the finishes of the grommets themselves. The rigidity of the grommets also means that when open, the curtains for nice, uniform pleats from top to bottom.

Grommet curtains are a great choice for anyone looking to create a sleek, contemporary style in their home. They are also a great choice if you plan to draw your curtains often, as the grommets slide easily over the rod.

Tab top curtains are another ready-made type curtain available in a variety of colors and fabrics. These curtains have thick, exposed loops at the top of the panel that slide over a curtain rod. When open, the tabs all touch and the header in between puffs out to create a nice fold. When closed, this looks more like a flat panel but with tabs at the top.

Tab top curtains work well for both a traditional and contemporary look. Because there is less fabric than pleated curtains, they are also less expensive.

This is very similar to a regular tab top curtain in its construction and hanging method; however, this includes a “cuff” or band at the base of the tab. The cuff not only adds a decorative element, but also helps to create a stronger ripple fold in the curtain.

The main difference between a back tab curtain and a pole pocket is that instead of a pocket that runs the entire width, there are simple tabs, or bands, that secure to the curtain rod. The result is that when open, back tab curtains don’t have as much gathering at the top as pole pocket, and instead have more defined ripples that run top to bottom.

The curtains in my main living areas are all tie top curtains! Tie top curtains are almost identical to tab tops, except that instead of a loop, there are two ties. You literally tie the curtain onto the rod using either a bow or a simple knot.

Pleated curtains are also sometimes just referred to as a pinch pleat. Pinch pleats are probably the most common type of pleated curtains and come as single, double (or butterfly) and triple. They offer fullness to the curtain, even when closed, and give a nice tailored look.

A pinch pleat curtain is a stylish yet simple design. Fabric is gathered and sewn together at the center of the “pinched” area, creating a fan at the top and bottom of the pleat. These pleats are spaced evenly along the width of the curtain.

A single pinch pleat has just single pleats, whereas a double has two and a triple has three. Double pinch pleats are also sometimes called butterfly pleats because the two folds fan out at the top and bottom, mimicking a butterfly’s wings.

All pleated curtains require more fabric to cover the width of a window because pleats remain even when the curtain is closed. With a single pleat curtain, you’ll need at least 150% width in fabric. A double pinch pleat will require 200% width and triple needs at least 250%.

An inverted box pleat curtain basically hides the gathered pleats at the back of the curtain, forming a seamless front with a single pleat opening. This is a less frilly version of a pleated curtain, lending itself to a more contemporary style that still has the fullness of regular pinch pleats.

Much like a French or pinch pleat, the Euro pleat (also known as the Parisian pleat) can come as double or triple pleats. In fact, a Euro pleat is very similar to a pinch pleat except that instead of being sewn in the middle of the pleat, it is sewn together at the top. This creates a beautiful fan effect that flows down from the pleat.

Euro pleats are a more modern version of a traditional pinch pleat and so are very fashionable right now.

A fan pleat curtain is just like the Euro pleat in that the pleating is tacked at the top of the header. The difference is that the fan pleat is only tacked the top most portion, allowing the fabric to fan out all the way from the top of the curtain down. The cascading of the fabric looks somewhat more relaxed in a fan pleat vs. a Euro pleat, but they are otherwise similar.

Pencil pleat curtains have a very traditional look to them. They are named as such because the gathers at the top resemble a line of pencils. The pleating goes all the way across the top, unlike pinch pleats which have space between each pleat. To me, the pleating gives a similar appearance to a pole pocket, the exception being that the pleating remains even when the curtains are closed.

A goblet pleat curtain is similar to a triple pinch pleat except that instead of creating a fan of fabric above the sewn pleat, a goblet or wine glass shape is formed. A stiff paper or backing is used to help the goblet keep its shape. Depending on the quality of the construction, though, not all goblet pleat curtains are suitable as functional curtains. Sometimes, the pleating is too delicate to be used and so these become stationary, or non-functional, curtains.

A goblet pleat curtain has a very chic and formal look to it.